How many homes can a wind farm power ?


SSE Airtricity says that when built the wind farm will deliver enough green energy to power 84,000 homes, which is equivalent to almost 90% of the homes in County Galway.


A new wind farm to be built in Galway will be the largest in Ireland at 169MW. One might wonder where the figures for the number of homes to be powered by a wind farm or indeed any generating plant comes from. And is there a more accurate method of calculating this figure for a new wind farm  ?- as we shall see, the correct answer depends on the amount of wind farms already installed in the system.

The calculation used in the above newspaper article is as follows :

So it is envisaged that the output of the windfarm will on average be 28.5% of it's ideal output i.e. if the wind was blowing at the right speed for 100% of the time.

So there will be times that the output will be above 28.5% and times it will be below. Hence, the key word is on average. Average power is not as useful as reliable or dispatchable power. That is why a system powered completely by wind energy is impossible.   So the 84,000 homes will not be powered directly by the wind farm, but rather as part of a system that includes power from more reliable sources such as gas, peat, coal etc. It is only equivalent power that the wind farm generates. On their own, a wind farm cannot power a house at all.

So the statement above is accurate to a certain extent - enough and equivalent are the key words. But it is actual power that we need to consider. We need to convert this to the equivalent in reliable power. (We are back to the old argument about the difference between energy and power.)

Capacity credit is therefore a more useful method of calculating the number of houses that can be powered by a wind farm :

The inherently variable nature of wind power makes it necessary to analyse its adequacy impact differently from that of other generation units. The contribution of wind generation to generation adequacy is referred to as the capacity credit of wind. This capacity credit has been determined by subtracting a forecast of wind's half hourly generated output from the customer electricity demand curve. The use of this lower demand curve results in an improved adequacy position. The amount of conventional plant which leaves the system with the same improvement in adequacy as the net load curve is taken to be the capacity credit of wind [Eirgrid 2009]. 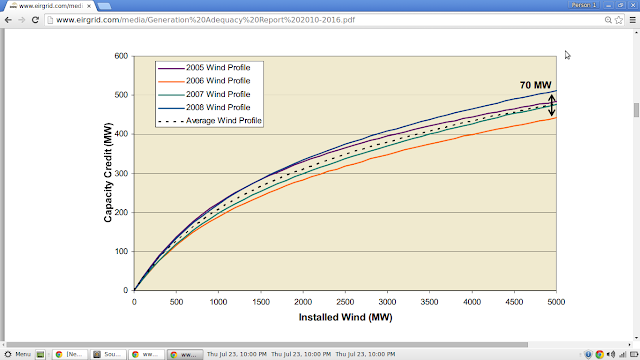 Analysis of wind data has established that this capacity credit is roughly equivalent to itscapacity factor at low levels of wind penetration. However, the benefit tends towards saturation as wind penetration levels increase. This is because there is a significant risk of there being very low or very high wind speeds simultaneously across the country. This will result in all wind farms producing practically no output for a number of hours (note that turbines switch off during very high winds for safety reasons). In contrast, the forced outage probabilities for all thermal and hydro units are assumed to be independent of each other. Therefore, the probability of these units failing simultaneously is negligible [Eirgrid 2009].


So we can see that this gives us a more accurate measure of the contribution of wind towards powering homes. We are currently at about 2,300 MW of wind so adding the new Galway wind farm will bring us to about 2,500MW. The capacity credit for new wind farms reduces as we install more wind farms so wind farms installed back in 2008 and 2009 contributed more to the overall system than ones installed today in 2015. This is because, to put it quite simply, the risk of blackouts increases (as does wind curtailment). Conventional gas generators will be placed on high alert for the next few years as we install more and more wind.

So our new 169MW wind farm will contribute only about 30-40MW to the overall electricity system in conventional generator terms. This equates to about 17,000 homes or 20% of the number of homes stated above.

Are we really getting bang for our buck, considering the environmental impact (about 70,000 tonnes of concrete will be required in its installation) and cost to the consumer of this wind farm   ?
Posted by Irish Energy at 22:16