Ireland Still Over Reliant on Fuel Imports Despite Investment in Wind

The Government's latest move to ban new oil and gas exploration comes at a time when Ireland has become extremely vulnerable to any supply line issues in post Brexit UK, where we import almost all of our fuel requirements from.  One would have assumed that this issue would have been taken into account in any decision to ban oil and gas exploration but this doesn't seem to be the case. The words import, dependency, UK or supply do not even appear in the Government briefing. As things stand, it is left up to commentators like me (unpaid I might add vs the civil servants and ministers who have had payrises) to draw attention to the facts and risks of the current situation.

Here is a graph of the annual net fuel imports since 2010, when the National Renewable Energy Action Plan took effect. All data comes from the SEAI so is easily available to Government advisors. 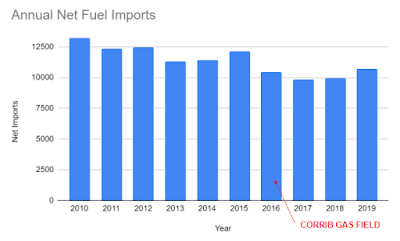 Source SEAI, Units are in ktoe
Its fairly clear that up until 2016, when the Corrib Gas field came into operation, we had barely reduced our fuel imports. It's also very notable that during the ten years to 2019, wind energy has made very little impact on imports. Around 3,000MW of wind energy was installed during this time. The rationale for wind has always been the reduction of fossil fuel imports.
So the very thing that has made an impact on reducing fuel imports, gas exploration, will soon be banned, while the failure of wind energy to dent imports in any meaningful way will continue to be ignored and the policy pursued anyway.
A recipe for disaster no doubt.
Posted by Irish Energy at 13:45 1 comment:

The Consequences of Losing the Irish Language

I've always regarded the Irish language as only being of cultural and historical value. However, having recently stumbled across the old Irish meaning for the very common place name "The Derries", I now realise that by not speaking Gaelic we have lost a valuable connection with our land. The Derries was the name given to a group (or islands) of oak tree stumps found in bogs. This comes from a reprint of a book originally printed in 1844 which itself refers to an earlier work by surveyor David Aher from 1814. It is not known whether the name was expressive of the existing condition of the bog or a traditional remembrance passed down through the generations from when there once was an oak wood that flourished in the bog.

In light of this interpretation, it would have come to no surprise to anyone in a Gaelic speaking Ireland, that building a large industrial sized wind farm in the hilly and peaty regions of Derrybrien or "Wet Bog" would have ended up in disaster as the destructive 2003 landslide proved to be.

More recently, the landslide that occurred in Meenbog would have been equally as foreseeable as the name means "soft mountain pasture".

Posted by Irish Energy at 06:31 No comments:

On the face of it, yes, they are. About 25% of the population of the UK has now being vaccinated and the data does show a decline in covid cases and deaths since January. 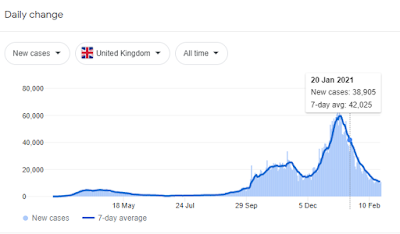 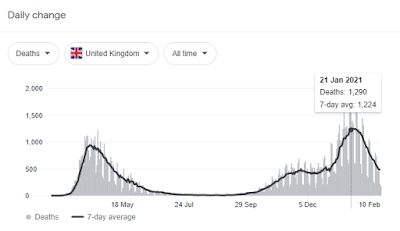 However, a similar decline in cases and deaths can be seen in Ireland which has only 6% of it's population vaccinated : 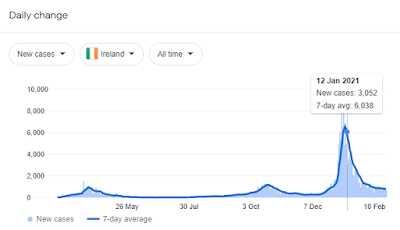 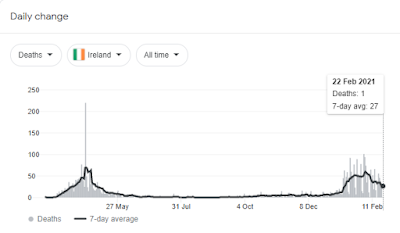 Of course, we may not know for sure until UK actually opens up again.

Are Winters in Ireland Getting Colder ?

Temperatures from Met Eireann show that the 2020/21 winter in Ireland was the coldest for eight years. It's perhaps then not a coincidence that this week the Beast from the East returns, begging the question - is a period of global cooling rather than warming on the way ?

What is very striking from looking at these graphs is that the last three winters have been getting progressively colder with the 2020/21 winter colder than the 1981-2010 mean in most cases. Is this a long term trend ? It's too early to say but there are signs that the Atlantic Multidecadal Oscillation is beginning a neutral / downward phase : 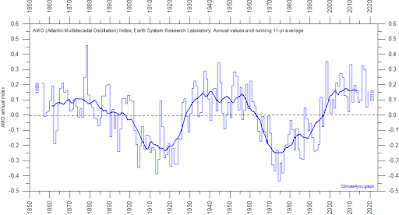 Posted by Irish Energy at 22:35 No comments: