I came across an interesting passage in the book I am reading, Specimen Days by Walt Whitman. People dying in the US of sun stroke, not in 2015, but in 1863 during the American Civil War : 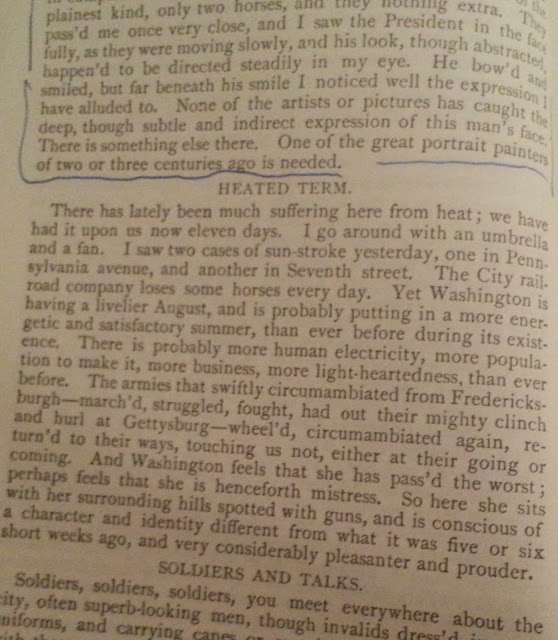 We can see that the world was coming out of the Dalton Minimum by then with high sunspot observations :

The Little Ice Age had finished around a decade before in 1850, and we were entering a period of warming :


A few weeks ago, and unnoticed by yours truly, David Davis MP took a step to address one of the most egregious practices of windfarm operators.
The big companies that build windfarms tend to put each of their developments in a separate shell company, with a small share capital and funding provided instead through a large loan from the parent company. With profits immediately passed up to the parent, the operating businesses will usually have no net assets, which means that if any large liabilities arise there is nothing available to meet them.
And liabilities certainly do arise. The most obvious ones are claims for damages from the neighbours, whose sleep patterns are disturbed by the noise and the flickering light. Further down the line of course there is the cost of removing redundant windfarms from the landscape. As it is, these costs will fall on the public.
Davis's Public Nuisance from Wind Farms (Mandatory Liability Cover) Bill would force windfarm operators to hold cash and insurance sufficient to cover against these costs. Its second reading is in September.
I don't think the subsidy junkies are going to like it.

The same thing is happening here in Ireland.

It sounds like the Irish taxpayer is being set up once again to pick up the tab for greedy profiteers.
Posted by Irish Energy at 19:15 1 comment:

The future of power generation in Northern Ireland - Part 2

The North South Interconnector - what is the payback of the project ?

The North South Interconnector is hailed as the panacea to Northern Ireland's electricity woes.

If we consider Eirgrid’s figures for the interconnector for 2020, they claim a central estimate of €20 million for 2020 and a sensitivity estimate of €13 million. The latter one is actually the justifiable figure. So how much does the North South Interconnector cost? In the presentation to the Oireachtas Committee of 16th June 2015, it was clarified by Jenny Pyper, who is the Chief Executive of the Utility Regulator in Northern Ireland:

Note: None of this includes the cost of the 600 MW of wind energy in Northern Ireland to be facilitated by the North South Interconnector, which as previous is in the order of €2 million per MW installed capacity.

From an engineering perspective what is provided above is simply astounding, a project cost of €286 million and a realist return of €13 million results in a simple payback of some 22 years. In the private sector a project would need a simple payback of some 5 years before it would be considered as viable. As regards the actual payback, then one has to include other costs, such as maintenance, operational costs, depreciation, interest rates on borrowings, etc. So this would push the 22 years out by many more. It is generally recognised that the economic lifespan of high voltage transmission systems is 45 to 50 years, so the payback on this proposed North South Interconnector project would be in the order of half its expected lifespan. In engineering terms this is simply absurd.

For instance, if we consider the UK’s Department of Energy & Climate Change report on “Research to Assess the Barriers and Drivers to Energy Efficiency in Small and Medium Sized Enterprises”, then this clarified with respect to payback period:

Why is this so, because it reaches a point where there are simply far better opportunities available to achieve an actual return on the investment, i.e. there is a better bang for the buck elsewhere. After all nobody begrudges that public money is spent on essential infrastructure for health and education, but what is proposed is a project, which wouldn’t see the light of day in the private sector, due to its chronic lack of viable payback. Have Eirgrid looked at alternatives properly ?

As was highlighted in Part 1, Northern Ireland requires new dispatchable generation capacity to replace that which no longer meets EU emissions standards. Could such capacity be installed for the reported €286 million, which is to be spent on the North South Interconnector plus the €2 million per MW to be spent on the associated 600 MW of wind energy? Given that the installed cost of Combined Cycle Gas Turbine technology is less than €0.9 million per MW, then the overwhelming answer is yes it could. So why was this option not investigated in the consideration of alternatives by Eirgrid?

Contribution of wind to peak demand


What was the contribution of wind to Ireland's peak demand during the most recent winter ? Remember, we are talking about over 2GW of wind capacity costing over € 4 billion to install.

The answer is very little, less than 1% :

Wind Energy Increases the Price of Electricity - The Proof


This is probably the most important graph in the current energy debate. I wonder how many of the Irish media will publish it ? Thanks to Euan Mearns.

Backup Reserve Levels to be Increased 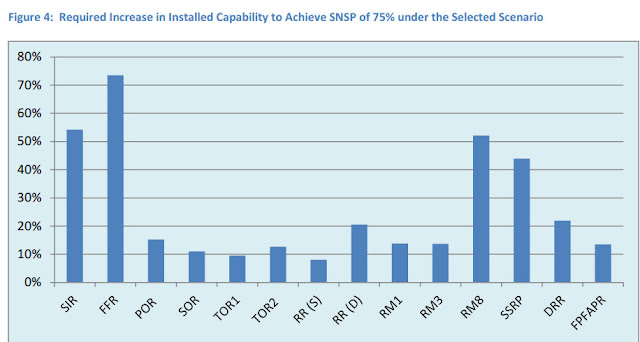 The above diagram, which comes from The Electricity Operator in Ireland (SEMO), shows the increases in the different types of reserve or back up required by 2020 to keep the system stable with high penetrations of wind.

Some of these reserve increases will come from fast acting plant like open gas cycle turbines (OCGT) and interconnectors (both existing and new entrants according to the paper). OCGT are less efficient and higher emitting than their modern versions (CCGT). Likewise, SIR referred to above, refers to Synchronous Inertial Response which relates to the level of stability a generator can provide when operating at low outputs during periods of high wind. CCGT operating at these low loads are also less efficient and higher emitting.

Nobody, it seems, has bothered to do a study to see if this will offset any gains from higher wind penetrations.

So who or what is driving these changes to our electricity system ?

These changes are being driven in large part by European legal obligations outside the control of the SEM Committee.