ESB operate most of the fossil fuel powered generators in Ireland. Their gas, peat and coal generating plants amount to about 3,400 MW. Hydro about 400MW and wind about 450MW. So about 80% of their generation is from fossil fuel sources.

Given that Ireland now has in total about 3,500MW of wind, we should, if the wind energy supporters are right, see wind energy eroding profits in ESB generation.

But their latest results show that their Generation and Trading business has increased it's profits by    € 26 million to € 70 million. Although there was lower running in Moneypoint, this was more than offset by a higher margin in gas plants.

A breakdown of this profit is not given, but we can safely assume that most of it came from fossil fuel generation since that comprises 80% of their business as I have shown above. It is indicative that during the same period, there was an impairment charge (i.e. a write down) of €1.8 million for a wind farm.

So almost a decade on from Ireland's Renewable Energy Action Plan which stated that :


we can now see that wind energy does not reduce dependence on fossil fuels, rather, it maintains dependence on it.
Posted by Irish Energy at 21:00 2 comments:

The Motor Industry is Unsustainable because of Debt


Gross new lending for car purchase was €2.1 billion over the past twelve months, the largest amount of new lending recorded since the series began. Non-PCP hire purchase agreements were the main driver of the increase in new lending 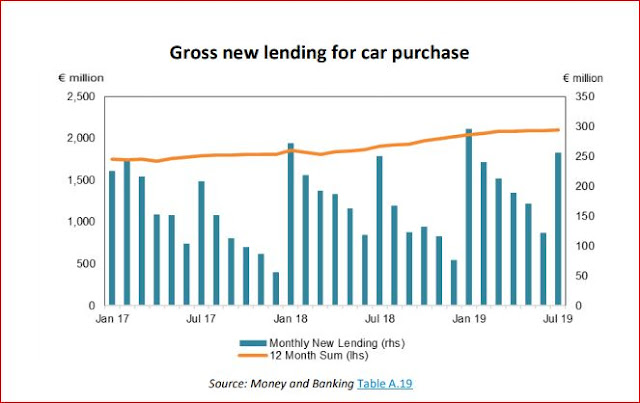 The number of motor cars could be reduced, if the Government really wanted to do it, by capping car loans for petrol and diesel vehicles.

Instead, they prefer the more trendy and coffers-friendly solution of carbon taxes.