According to NASA, temperatures at Valentia increased in 2015 :


However, the actual data from Valentia shows temperatures dropping in 2015 :


By now most people will have received their electricity bills with increases in the PSO Levy to pay for wind energy and other renewables as well as peat. Renewables now makes up most of the levy (77%). 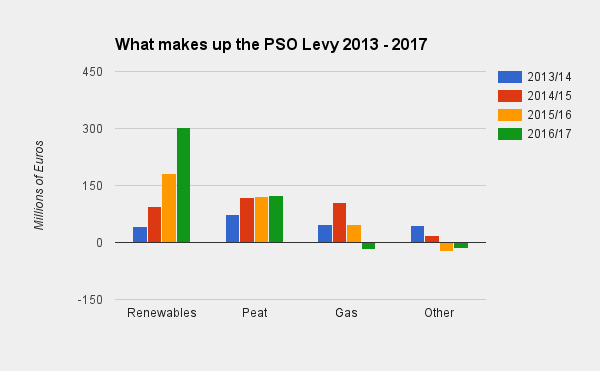 So tonight there was a presentation in Trinity College by Tim Palmer of Oxford University. First, the good parts - he tried to show both sides of view and addressed some of the claims made by climate "skeptics".  On the bad side, as usual with these events, there was very little time for questions at the end.  Here is just some bullet points and notes I made on the lecture :

•  He gave a counter argument to some of the claims made by Matt Ridley in his October lecture to GWPF. However, no mention of greening i.e the increased plant growth observed around the planet. This to me was Ridley's ace card so I was surprised that he didn't take that on (or maybe not surprised).

•  He explained quite well how using data over short timescales can be misleading. I agree with this however his own temperature graph (from NASA) started in the late 1800s. This is an extremely short time range to be basing any theory on. We didn't have weather stations before 1850 but we know (thanks to geologists) about the Little Ice Age. The Little Ice Age ended around 1850 when CO2 emissions were a tiny fraction of what they are now. We started coming out of the LIA around 1720. This data should be factored in to put climate change in perspective.

• He explained how the climate system is complex, again I agree, and that it is a chaotic system. When you introduce man made CO2, the system tends to become less chaotic and you end up with warming.  So if you start with this theory, which looks plausible, then you need to fit the facts into this theory. This happens with NASA graphs which are based on adjusted data. You need to take the cooling in the 70s out and you need to reduce the warming in the 40s. You also need to ignore the Atlantic Multidecadal Oscillation (and PDO) which has a well established positive / negative cycle. This question was posed at the end but I cant even remember the answer. Again, these issues need to be addressed but were not considered as the original "greenhouse gas" theory was infallible.

• Palmer explained the clouds issue really well - we don't know whether they lead to cooling or warming.

• No mention was made of solar irradiance. Again, there was a question on this but an all too brief answer.

• A question was asked at the end asking for evidence that CO2 remains in the atmosphere for 50 years or more. Palmer didn't have any evidence for that claim yet the claim was made as if it were fact. 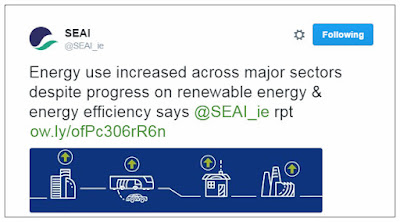 The Human Cost of the Energy Transition


An 81 year old Spaniard has died from suffocation after she resorted to using candles due to being unable to afford to pay her electricity bill.  Spain has one of the largest renewable energy sectors in the world. Last year, total investments came to € 5 billion and most recently George Soros was looking to get a piece of the action. At the same time, Spain ranks as having the 4th most expensive electricity in EU,  just behind Ireland. Der Spiegel reports that according to a study 7000 Spaniards died in 2014 due to the effects of energy poverty. These unnecessary deaths come at a time of record low oil and gas prices.

Yet somehow, the media narrative is that the people questioning the Energy Transition are bad people, while the people who have no problem with sacrificing old people to the green altar are inherently good people.

Everybody knows that if they used a fraction of the money being spent on renewables and more electricity generation on insulating people's homes, there would be far less deaths. But of course in the EU, lobbyists must get their way.

CO2 Is Not A Pollutant

Back in 1922, CO2 was not considered a pollutant, but beneficial for crops : 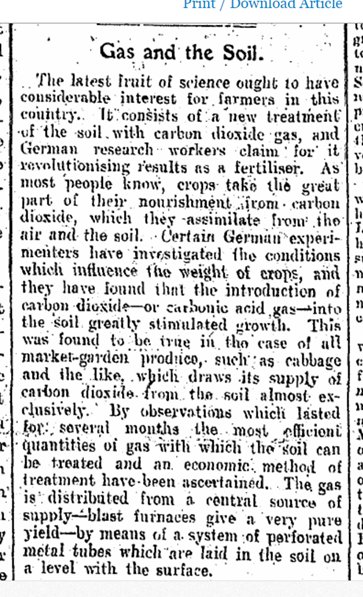 The End of the Traditional Media ? 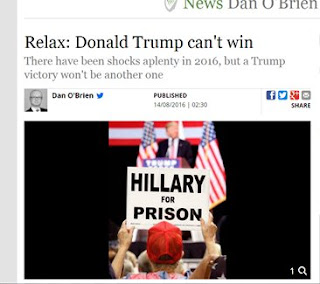 It's been an extraordinary year in politics as event after event proved the "experts" and the media wrong. The above article appeared in an Irish newspaper back in August. The article below about climate change appeared in the same newspaper a week later. Both pieces suffer from a distinct lack of critical analysis and instead focus mostly on emotion and even hysteria. This approach does sell newspapers as Scott Adams says humans are mostly irrational. Once the irrational idea that Trump could not win the election took hold, this then evolved into a mass hysteria where even the bookmakers became hoodwinked. Not alone did they lose big on the Trump victory, they paid out on a Trump defeat before the actual result came in ! Rational and clear analysis becomes almost impossible in such an environment and even intelligent people succumb.

In such environments (mostly created by the media), the media will seek to reinforce how we feel about the issue by saying "Relax" or in the case of the climate "Worry". At this stage, we have moved from being 90% irrational to 100% irrational. All doubt has been removed. Only the sudden shock of reality can make us see sense. 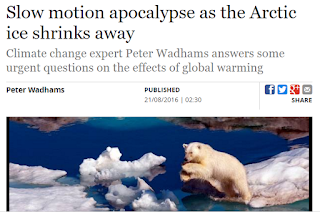 Back in 1968, an English man had the crazy idea about transferring news and information across wires and into TV screens and even on to computers. It turned out to be very prescient. 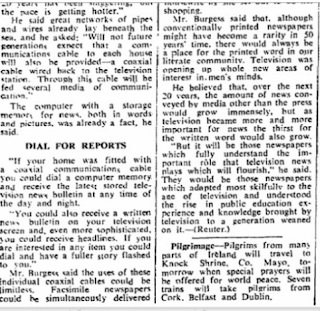 The internet means you can get different opinions and analysis and make up your own mind. If you prefer the emotive stuff, you can still find that online. If you prefer critical analysis and debate then you can find that too which before was not as accessible. Articles can be instantly fact-checked and updated to give the most accurate assessment at that time.

President Elect Trump had a significant online presence, much bigger than that of his opponent. Turns out that was not something to "Relax" about. The old print media is now looking increasingly irrelevant.  We may be seeing it going extinct in the near future. Something they will certainly be "worried" about.


The researchers believe there is plenty of data to show we will also have a much stormier future. “We have seen the trends and they agree with the models,” Dr Murphy says. “All we have to do is look at the extremes – for example, the flooding from last year. It could be anything from 10 per cent to 40 per cent wetter in winter [Irish Times].”


Scientific theories should always be based on long term evidence and data.  Stating that the flooding was bad last year is not science. In fact, it's the exact opposite of science. Yes, last winter was exceptionally wet. But only three of the past eight winters had above average rainfall i.e 37%. The conventional narrative is that winters are getting progressively wetter but in fact it's the opposite.   Almost two in three winters now in Ireland are drier than the long term average. This can all be checked on Met Eireann website  (although I notice that it's harder to find the archived reports than it used to be).

So the great delusion goes on. We are all expected to join in and pay up. Dissenters are ostracized.  We have to spend millions to satisfy how some people feel because last winter was a bad winter. Just like 1930 was a bad winter. The difference is in the 1930s the authorities looked at dredging the rivers as the solution :

Here is a nice video on Strategic Environmental Assessment (SEA) produced by UNECE. I notice the word "health" comes up a lot. Could this be the reason why the Irish authorities bypassed it ? The adverse health effects of wind farms on humans is well known now.


There is a recent European Court case ruling out on the SEA which means that an SEA must be done before wind farm guidelines are issued. So perhaps now human health will have to be considered.

Posted by Irish Energy at 19:15 No comments: