The Gaping Holes in the 2040 Plan for Electric Vehicles

Reports of my demise have been greatly exaggerated


Mark Twain wasn't the only one to whom this applied.

Sales of diesel cars in Germany are increasing again, 33.1% in the first quarter of 2019 versus 32.3% this time last year. Down a bit from the nearly 50% four years ago. However, purchasers are canny and recognise a good buy, particular so that with the new Euro 6 emission standards, even the Environmental NGOs have to recognise that they are very clean. A 95 to 99% NOx emissions reduction on previous Euro 5 emission standards based on actual measurements driving on the street.

Also on the plus side a diesel car has less CO2 emissions than an electric car.

Just goes to prove that our lords and masters with their forthcoming ban on internal combustion engines have their heads once again in the clouds.

The principal findings of the study are:

• In the natural turnover of the vehicle fleet, the significantly reduced NOX emissions from Euro 6d diesel passenger cars will be as effective as zero emission vehicles in helping cities become compliant with air quality standards.

• For NO2, PM2.5 and PM10, no appreciable effect on air quality compliance or population exposure is observed between any of the modeled diesel passenger car scenarios or their replacement with equivalent zero emission vehicles. [Full Report can be read here].

It's unsurprising to see that even though Norway are throwing six grand of subsidies per electric vehicle per year, giving them free access to bus lanes and exemption from tolls, have the cheapest electricity in Europe (lots of hydro), the whole electrical vehicle initiative in Norway is running into big practical difficulties.

Same maths as I was doing below in the Irish situation and we won't have those levels of subsidies! Also interesting in that Japanese carmakers are renowned for being driven by their engineering departments, they do practical sums and don't let marketing spin dominate decision making. In other words if you assess technology trends because you are fully immersed in all aspects of them, you can make rational decisions about future investments, for example, Honda :

As to what this bubble economy electrical vehicle initiative actually delivers, well a short analysis of this lunacy:

If you were to buy a Fiat Punto, which does 120 g of CO2 per km, you could drive it for nearly 170,000 km before you would have emitted the same 20 tonnes of carbon dioxide.

Recently, our 'rulers' announced their plan for 2040. Let's just focus on one 'trendy' aspect:

So lets look at some simple sums, not a strong point of our glorious rulers, but relevant for plans which are meaningful and don't end up as an awful mess. To put the above into perspective, the CSO figures tell us that we have some 2 million cars in this so called 'Republic'. I accept that if one has enough money to buy a top range Tesla, one gets a 100 kWh battery pack, which on a good day can do something close to 400 km. This is what one is entitled to expect from what is a 'car' after all. However, the problem is when one needs to recharge it, as a domestic house is typically only set up for 7 kWh. So if you turn off all your other electrical appliances and wait 14 hours, you'll be ready to go again. Not very practical is it?

However, not to despair as they are going to build out new charging infrastructure for us instead. Well that 100 kWh battery may theoretically be 'supercharged' in something like 30 minutes, but let's assume that such a charging point can charge three such Teslas in an hour. This means that it has to deliver 300 kWh in an hour equivalent to 0.3 MW. So if we build a thousand of these, we then need a 300 MW power station to supply them. By international standards, this is a medium sized power station, which would be comfortably able to cover 10% of the average demand currently on the Irish grid.

So in simple terms if you want to be able to charge 3,000 electric cars in an hour, which is only 0.15% of the number of cars out there, you need a new 300 MW power plant, which is a large enough to cover 10% of the current country's demand. It's pretty obvious that unless you string up the country with new power stations and pylons, none of this is going to work, unless the public is prepared to spend a lot of their hard earned cash on electrical vehicles, which they will just have to park most of the time, as they don't have the hours to stand in line, awaiting an opportunity to get a charge in at one of these new 'charging infrastructures'.

This is actually some pretty basis stuff and you would think that before they go off announcing their grandiose plans, they would have thought about it first. After all the data is published and readily available, such as from the SEAI's annual publications:

Transport uses some 42% of energy consumed in Ireland, more than double that which goes into electricity generation. If that energy demand is to be switched from fossil fueled vehicles to electric vehicles, then the electricity infrastructure we have would need to be more than doubled, even allowing for the fact, that the current grid is somewhat lightly loaded at night. Think about this one, you get an allocated slot to drive your Tesla to the new charging infrastructure to hook it up between 2.30 and 3.00 am - is this progress?

There was a Strategic Environmental Assessment completed for this Project Ireland 2040, but it does not include a cost benefit analysis for EV's :

Even when the above embedded CO2 impact of EV's is not included, the costs still do not stack up :

• The Tax/Exise Revenue on Motor Fuel runs at about 66%

• EVs availing of Toll refunds of up to €500 per year could cost an additional €5,000 over a vehicle life. http://www.etoll.ie/electric-vehicle-toll-inc/

If Air quality is the argument in Urban areas then tackling solid fuel heating emissions should be the approach. The 2016  Residential Solid Fuel and Air Pollution Study North South Ministerial Council (NSMC)  reckoned something like 93% off Urban Air Pollution ( which account for some 1200 deaths annually) was caused by Solid Fuels related pollution. The Report urged switching from solid to liquid fuels as the most effective remedy to improve Urban Air Quality.

Thanks to Pat Swords and John Callaghan for the number crunching.

Record Imports From China Has Offset Emissions Savings in Ireland

Ireland now imports a record € 5.3 billion of goods per year from China, higher than during the peak boom year of 2007 and double that of 2011. China is the biggest emitter on the planet so these imports come with a very high carbon footprint. Based on calculations made for other countries, I have calculated CO2 emissions of 6.1 million tonnes (MT) associated with our Chinese imports for last year.

CO2 emissions from electricity generation in Ireland in the year 2000 was roughly 17 MT. This has now reduced to around 12 MT . Imports from China since 2000 have increased by € 3.8bn, a consequent emissions rise for these imports of almost 4.3MT.

So at a global scale, Ireland's efforts to reduce emissions in the electricity sector have been mostly offset by our increased outsourcing of emissions to China.

This is something that's completely overlooked by the climate change advisory panel which essentially treats Ireland as an isolated entity with a separate climate to the rest of the world. In their most recent report, international trade only gets a single mention while carbon tax gets mentioned 57 times. China fails to get even a single mention.

2) USA imports from china was approx $400bn in 2012. Associated CO2 emissions was 512 MT according to carbonbrief.org. Which works out at 1.28 MT per $billion of imports, converted to euros is 1.14 MT per € 1 bn.  Emissions in china are up since 2012 according to the Guardian, so these emissions are actually understated. 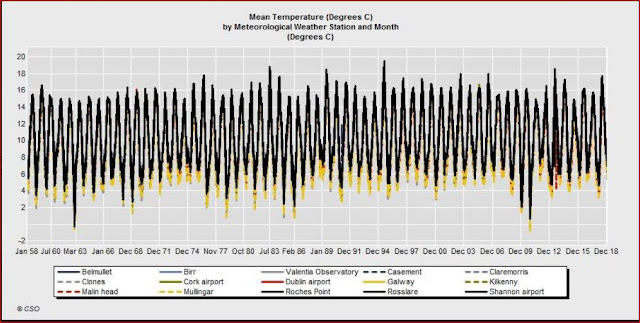 I created the above graph from temperature data published by the Central Statistics Office (CSO). As you can see, it shows a distinct lack of warming in Ireland since the 1950s. There is no sign of the famous hockey stick or indeed anything alarming. Yet the climate hysteria rolls on, seemingly oblivious to the actual facts.
Posted by Irish Energy at 06:13 2 comments:

Michael Hudson gives an insight into how modern financial markets work. It perhaps explains why wind farms in Ireland are being continuously bought and sold on.

MH: The stock market no longer primarily provides money for capital investment. It has become a vehicle for bondholders and corporate raiders to borrow from banks and private funds to buy corporate stockholders, make the companies private, downsize them, break them up or strip their assets, and borrow more to buy back their stocks to create asset-price gains without increasing the economy’s tangible real asset base. So the financial sector, except for a brief period in the late 19th century, especially in Germany, has rarely financed productive growth. Financial engineering has replaced industrial engineering, just as in Antiquity creditors were asset strippers.


It looks like the reality is finally hitting home that wind energy will not be lowering energy bills, even the mainstream media now seem reconciled to this fact.

"We import a huge amount of our energy from abroad," he said. "We import gas, coal and oil, and unfortunately all of those fossil fuels are increasing in price and still remain very, very high on international markets. Unfortunately, this means that further price increase cannot be ruled out in the months ahead."Mr Cassidy said renewable energy will not necessarily be cheaper. ESB is investing in wind energy but investment costs money."Renewable energy is greener, it is cleaner but it is not necessarily cheaper energy yet, so just because we are using more renewable energy doesn't mean that's going to lead to lower bills just yet."