Because of EU emission rules, the carbon emissions for these exports will be counted in Ireland, the country of origin, which will benefit UK with emission free electricity.

The Irish government intends to increase foreign aid even though current spending is massive for a small country like Ireland at  € 742 million per year. Most of the media and politicians do not seem to care that the problems in places like Africa are complex and cannot be solved by yet more foreign money. The Irish government have long held a simple maxim - if there's a problem, throw more money at it (see our health sector), rather than attempting to understand the root causes and build solutions from there. Recently, African leaders have highlighted some of these root causes but only Dublin politician Maureen O'Sullivan dared to raise them in the Irish parliament :

At a recent event in Dublin, the Rwandan ambassador made the point that $63 billion in illicit flows leaves the developing world. That is more than the foreign direct investment and aid going into those developing countries. Policy coherence would mean Ireland taking meaningful steps on tax justice. The Tánaiste may say that we got rid of the single malt, which is positive but it does not go far enough. What was needed was to take the steps the BEPS process has designed to tackle the underlying problem and prevent replacement structures emerging.
The policy incoherence is also seen in trade treaties in the imbalance between what the developed country gains and the minor gains for the developing world. For example, the Ireland-Ghana tax treaty prevents Ghana taxing the capital gains of mines, factories and large businesses owned by Irish companies. No spillover analysis was done prior to the treaty, which allowed for that and other examples of unfairness [link].

The President of Ghana, a country with some of the best farming and mineral resources in the world, recently told Macron that he wanted to move Africa away from being a dependent nation - "beyond aid". For President Akufo-Addo, the loss of Africa's best youth to Europe is something to mourn, not something that should be celebrated and encouraged, which seems to be the attitude of NGOs in Europe.

Why aren't governments listening to African leaders ? Well for a start there are the financial incentives in maintaining the foreign aid industry rather than helping to fix the underlying problems. Irish NGOs receive €5.5 billion per year from the Irish taxpayer.  The tax treaties are benefiting Irish companies operating in Africa. What of cocoa, one of Africa's largest raw material exports ? Europe dominates the worldwide chocolate market. It is Europe's top processed crop export and Europe is also the world's largest producer and exporter of chocolate. While Africa exports the vast majority of cocoa beans to Europe, it's share of global chocolate exports is less than 1%. There is significant room to increase chocolate production in Africa, could the foreign aid money be used to help local entrepreneurs there? Imagine Ireland's economy without the food production industry and we can begin to understand the challenges facing Africa.

There is a long way to go to make Africa go "beyond aid", but it requires new thinking, rather than the old outdated aid industry, to fix it.


The green movement in Ireland have in recent months drawn attention to human rights abuses in a Colombian coal mine where Ireland imports coal for Moneypoint power station. The matter has been raised in the Irish parliament (The Dail) and there are calls to shutdown Moneypoint before it's planned closure in 2025. As this blog has recently shown, this would lead to increased dependence on gas imports as our significant wind energy infrastructure is incapable of replacing Moneypoint.

While these issues are concerning, one has to ask the question as to why the human rights abuses and environmental damage taking place in China, where rare earths are processed for use in wind turbines and electric cars, is also not being highlighted in the Dail.

The first picture is of the coal mine in Colombia. The second picture is of a radioactive acid lake in China beside a rare earth processing plant. Moneypoint coal fired power station was built in 1985 and has been operating ever since, making it quite possibly one of the most successful capital projects ever in Ireland. It has three generating units, each with a capacity of 285MW, making it the largest single power station in the country (total output 855MW). All three of the units suffered forced (or unexpected) outages this year. This blog article will look at what happened when the final unit went offline on the 26th September at 11pm.

Firstly, it is important to point out that Moneypoint is required to be on load (or online) at all times to support the 400kv network from the West to the high demand centre in the East (see graph here).  This means that when Moneypoint is no longer operating, something else must be ready to instantly step in to replace it.

It is often claimed that renewables can replace Moneypoint. On the 25th September, wind energy was at very high levels at over 2,000MW. But during the 26th, it declined steadily to below 500MW. Prior to the Moneypoint outage, wind began rising again reaching around 700MW at 11pm. So between 70-75% of wind power  had dissipated within twenty four hours. By the 29th, it had fallen to almost zero. Wind energy's intermittency is one of the main reasons why it can never replace a power station. Just when wind energy was needed the most, it was not able to deliver. 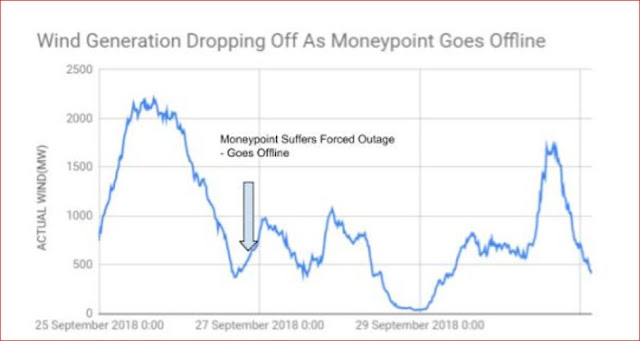 There is another more technical reason why wind cannot replace a power station which is explained in more detail here. In short, a certain amount of conventional power stations must be kept running to maintain a stable grid.

We can see in the below graph, that the back up plant that replaced Moneypoint was Tynagh gas powered station (CCGT) in County Galway.

Like any gas powered station, Tynagh can be switched on and off as required i.e dispatchable. An interactive presentation of the gas and steam turbine is available here. Since replacing moneypoint, the plant has itself tripped three times with the latest trip due to "high exhaust temperature".

Mechanical faults are common to both fossil fuel and renewable plant, the crucial difference is that intermittency only occurs with renewables. The above staggered profile of Tynagh (in red) is very similar to that of another gas plant - Great Island, which you can see in a previous post on this blog. It could be that ramping the generator up and down like this leads to mechanical problems.

In contrast, we argue that by far the best way to address both Irish energy security and the pressing need for rapid decarbonisation is to constrain and reduce energy consumption (through efficiency measures and/or absolute reductions in energy services) and to directly exit from the use of all fossil fuels, including natural gas, as quickly as is safely feasible, replacing them by indigenous zero- or (potentially) negative-carbon energy resources to the maximum possible extent.

The recent closure of Moneypoint and it's replacement by Tynagh gas powered station shows that even with large amounts of renewable capacity available (in this case wind), back up gas powered stations are still a necessity for the foreseeable future.