The Energy Bubble is Clearly Unsustainable 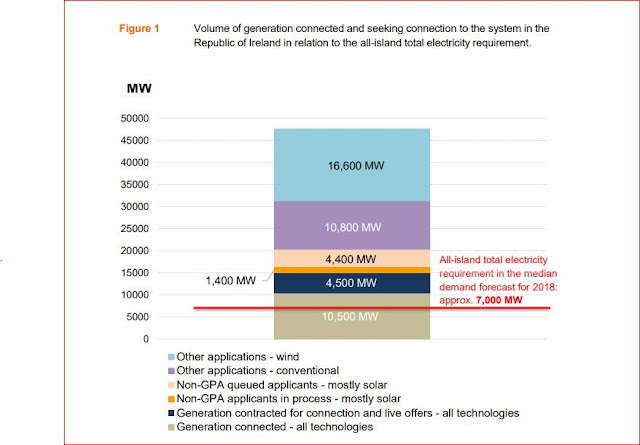 The Energy Regulator has reported that there is currently a backlog of 36,000MW of renewable and conventional generation connection applications (See above graph). This would increase the current capacity of 10,500MW to a staggering 46,500MW if all of these applications were accepted. As the regulator points out we only have an electricity demand for about 7,000MW.

Under normal circumstances, only capacity that replaced existing capacity or was required to meet additional demand or reserve requirements would be accepted. Now, because of the rush to meet EU targets, thousands of megawatts of inefficient and intermittent renewable generation are being added. Renewable generation, mostly wind and solar, make up about 70% of the planned generation figure.

This will lead to a low capacity factor across the board, with all generators operating inefficiently and intermittently. As this blog reported recently, many wind farm companies are making losses. As more generation is added, the market share for all generators will be eroded and we will see more loss making generators. Which will require yet more government intervention to keep the lights on (and possibly another NAMA to be set up).

And it gets worse. The Grid will require a large upgrade as most of these solar and wind farms will be in remote and dispersed regions far away from centres of demand. The costs will simply keep rising exponentially.

In particular, the CRU notes that the existing backlog of connection applications amounting to 36,000MW is already significantly in excess of the all-island total electricity requirement. Keeping the non-GPA process open to further applications during the consultation period would only increase this volume. This would potentially add to consumer costs with no discernible benefit.


For example, with this much renewable generation, it will become increasingly difficult to stabilize and manage the grid frequency. That is why more conventional generation is required to maintain stability and of course this adds to the costs. The Regulator refers to these generators as DS3 providers and has proposed giving them priority over renewable generation :


DS3 system services are required by the system in order to accommodate increasing volumes of non-synchronous renewable generation. The CRU decided in CER/16/284 that providers of those services will be prioritised for a connection offer under the non-GPA process, and requested the system operators to develop a process for this prioritisation.


The regulator also plans on suspending some of the renewable generation which would of course be a wise decision and be in the interests of all consumers.  Naturally, the renewable lobby groups are not happy and have somehow managed to spin this as a decision that will "result in higher electricity prices." It's difficult to understand why they are lobbying for more supply in an already over-saturated market which will erode the market share of existing renewable generators.

The energy regulator should stick to the facts and figures as presented in her document. That way she can defend her actions later. It could be the first time an energy regulator has stood up to the green lobby and protected consumer's rights. The Energy Bubble is clearly unsustainable. I for one am hoping that for the first time in recent Irish history, an Irish regulator does the right thing before it's too late.
Posted by Irish Energy at 21:06 13 comments:

There was much consternation in the media over Leo Varadkar's wind farm "gaffe" at the White House where he boasted that he rang the local council and managed to stop a wind farm from being built beside Trump's golf resort in County Clare. There was talk of cronyism and political favors. The facts turned out to be different. Varadkar, then the tourism minister, emailed the tourist board Failte Ireland advising that they make a submission on the development. Failte Ireland make submissions on planning applications all the time, including on wind farms. If one thinks logically about it, how could a tourist board not oppose a wind farm in a tourist region ? The only issue is should they really need prompting from a minister to know that a wind farm might damage tourism in an area.

Compare the outrage from the media about Varadkar's comments to the appeasement when the Government announced they would change the planning rules to facilitate large multinationals by taking rights away from objectors to data centres (see here). Here, the government is not as much interfering in the planning system, but radically changing it to favour developers. There was no outcry from the media. There was no rally call to defend the rights of citizens. Suddenly, the concept of equality took a backseat to expediency and the latest fad of the day.

In January of this year, the Irish Courts determined that An Bord Pleanala (the main planning authority in Ireland) must, in relation to European Union Projects of Common Interest (PCIs) :

act as a clearing-house or framework coordinator for the development consent process. It is not a role that requires any substantive decisions to be taken regarding the acceptability of a proposed development  [Martin Vs An Bord Pleanala].


In other words, once the European Commission decides something needs to be built, the planning authorities in Ireland must approve it. The High Court also ruled that "it is not the function of An Bord Pleanála to review government policy or to consider public submissions in relation to government policy.

Once again, this ruling, which effectively limits the rights of citizens to challenge government and EU decisions, was ignored by the media. This is the kind of environment where cronyism thrives unchallenged and unhindered. Objections to developments based on logic and evidence can be easily dismissed.

An independent and effective planning system is simply not possible with the current system, let alone with the system that is being planned to facilitate data centres. If the rights of citizens were protected in the planning system, then there wouldn't be any problem with cronyism or political favors as the system would have to take account of facts, evidence, transparency and due legal process.

Blackouts Probably A Greater Threat to Northern Ireland Than Brexit

The Northern Ireland Affairs Committee is currently in the process of carrying out an inquiry into it's long neglected Electricity Sector. I have been highlighting the issues in the North since 2015. Things are now coming to a head.

There is an interesting and worrying submission made by AES, the owners of Kilroot and Ballylumford coal powered stations.


There is a requirement for three power stations to be on load at all times in the region to keep the grid stable. Two of those are Kilroot and Ballylumford. If they close down, blackouts are a certainty for Northern Ireland. What will the cost be to the economy there as industry is forced to shut down or depend on their own off grid electricity sources ?

The media are focused completely on the impact of Brexit and the Irish border on the North's economy. But in the end, it may well turn out that political decisions made about their electricity sector will have the most adverse impact. Perhaps then, people will wish they discussed this issue a lot more.


As the "Beast from the East" hit Ireland on the 28th February, things were looking good for wind farmers. The east winds were predictable and constant, unlike the variable westerlies that hit Ireland most of the time. Wind energy became baseload power for the first time on the Irish grid. On the 1st March, the capacity factor for wind was 80%, a power output normally reserved for coal or gas generation. However, a problem occurred on the morning of the 28th. The interconnector to the UK (East West interconnector) tripped out. This meant that surplus wind generation could no longer be exported to the UK. High amounts of wind generation would have to switched off or "curtailed".

A further problem happened on the 2nd March as the storm reached it's peak. Power cuts became a frequent event. Power cuts are inevitable of course during storms and periods of extremely high winds, which is very unfortunate for wind farmers as demand for their product, electricity, is reduced just when their supply is at it's highest. In fact, over the four or five days of the "Beast", demand was relatively normal. This is in stark contrast to the Big Freeze event of 2010 where demand reached over 5,000MW (and wind generation was abnormally low). During the Beast, demand reached a high of about 4,600MW on the 28th February. The periods of highest winds (1st - 3rd march) saw demand reach only 4,200MW.


On 1st March, wind energy was generating about 59% of the total electricity production, one of the highest penetrations ever. However, by the next day, as power cuts became widespread, wind energy was been curtailed by as much as 45%. Nearly 1,200MW of wind was been shut down at 4am.

Had the interconnector been in operation, 500MW of this surplus wind could have been exported.  Demand, in fact, dropped by 10% on the 2nd March compared with the day before, presumably due to the power cuts.

These are problems that will only intensify as more wind capacity is added and more and more generators are looking to get a piece of the demand "pie". Interconnectors, like storage, seem like an easy solution in theory, but in practice things are often different.