The Impact of High Levels of Wind Energy on Conventional Plant

On Wednesday 25th January 2017 wind energy reached a new record of 2,400MW for the Republic of Ireland. This post will look at the impacts on some of the other generation sources. 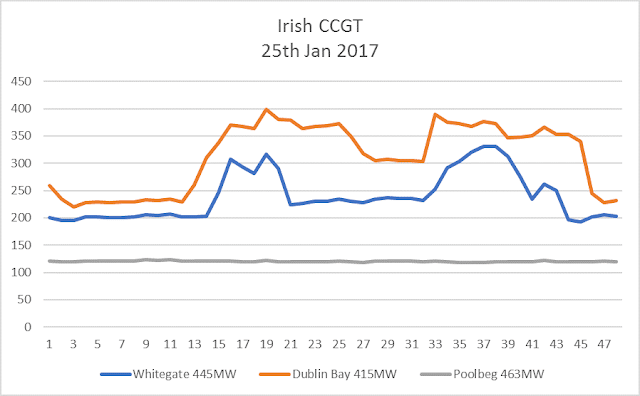 Only three out of eight CCGT ran during the day - two in Dublin (Poolbeg and Dublin Bay) and one in Cork (Whitegate). Presumably, the other 5 plants were paid capacity or constraint payments to shut down for the day.

Wind generation was unusually stable during the day and so Dublin Bay and Whitegate mostly followed demand while the output from Poolbeg had a flat profile. Dublin Bay ran the most efficiently. Whitegate's output hovered between 45% and 60% of it's maximum (or rated capacity otherwise known as load). Poolbeg, on the other hand, operated at about a quarter of it's rated capacity. Operating a CCGT at this level leads to higher specific emissions and fuel consumption, something like driving your car in second gear all the time.

It would have been therefore preferable to have operated Whitegate on higher loads and take Poolbeg off the grid altogether. The requirement for two power stations to be on load at all times in the Dublin area probably lead to this less than ideal situation. 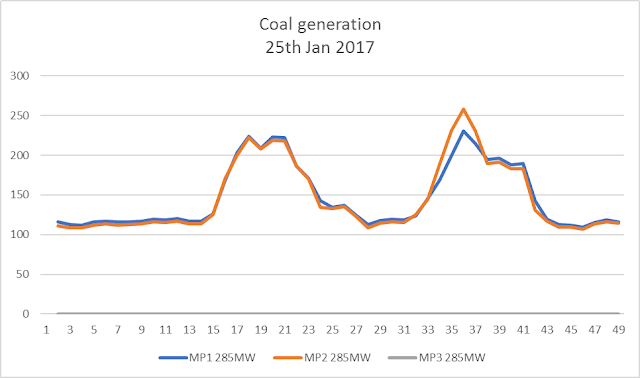 Two out of the the three generators at Moneypoint operated for the day and like the CCGT mostly followed demand.   They operated at an average of 50% of maximum output with minimum output at 40%. A load of 40% capacity is likewise not exactly ideal in terms of efficiency. 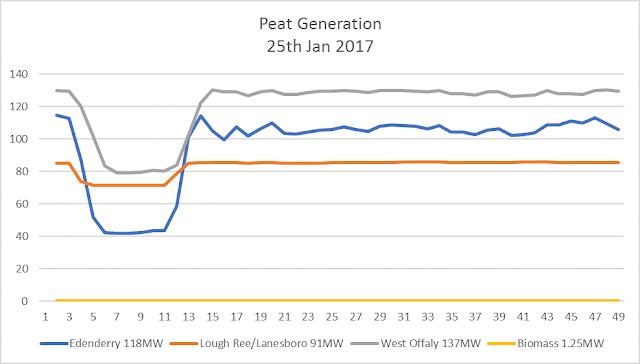 The three peat power stations are being run on baseload and as a result are not affected by high wind levels. The biomass component seemed to be out of action. The question arises as to why (like wind) peat still receives a subsidy if it is always allowed to operate in the electricity generation market (Though I think the peat subsidy is being phased out). 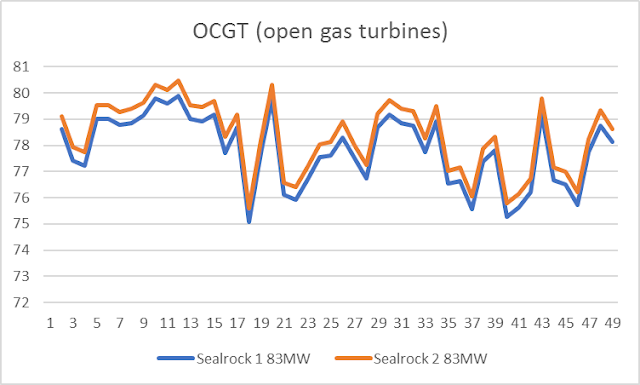 Both open gas cycle units at Sealrock operated at close to full output for the day as like wind they have priority dispatch in the system. 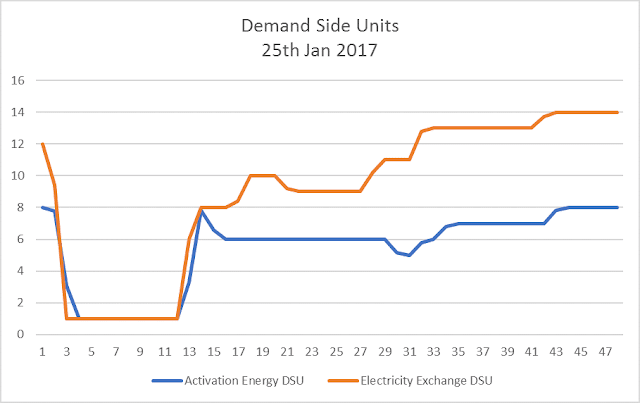 One relatively new problem for Eirgrid is that despite having all this additional generating capacity in place, matching supply with demand is not as straightforward as previously thanks to the presence of stochastic wind energy. Fast acting plant is one answer to this. Another solution is reducing demand during periods of high demand. Demand side units reduce the demand during peak times giving industrial users a choice to shut down production or use their own diesel generators.

As more wind is added, more reliance will be placed on DSUs and ironically diesel generation. During this day, on average 18MW per hour of DSU was called on to help keep the lights on. Not a significant amount at this stage. But according to Eirgrid :


The capacity of Demand Side Units in Ireland has increased to 230 MW, and is set to increase further.

The UK interconnector played a crucial role on this day. For most of the time, Ireland sent across it's surplus wind but for an hour, between 6pm and 7pm, Irish generation was insufficient to meet the rise in demand as people arrived home from work and turned their kettles and cookers on. It's an unfortunate fact that you can't "switch the wind on". Also you can't simply switch a large power station like a CCGT on.

The preferred solution by Eirgrid, presumably because it was cheaper than the other option discussed below, was to reverse the direction of electricity in the interconnector. However, the UK was strapped for generation at this time and (incredibly) France were reliant on UK imports. A precarious situation for the UK but 120MW of spare power for Ireland is not a significant amount for a system of their size. 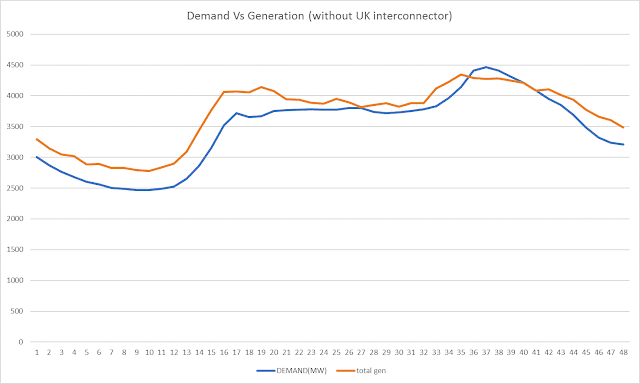 There is still a shortfall of about 200MW at peak time (where blue line is higher than orange line in the second graph above) which I'm not sure how they made up. Possibly more hydro or DSU or some other peaking plant that I may have missed.

The other option available to Eirgrid would have been to simply increase output from Poolbeg as the demand began to rise. After all, it was being operated at well below optimum efficiency as discussed above.  This is presumably what would have happened if there was no interconnector. Usually the low cost of power purchased from UK would make importing a cheaper option but I can't imagine a grid with such a tight capacity margin as the UK's giving away low cost power during peak demand times. But I can only assume it was somehow cheaper in this case.


The power UK sent to Ireland was made up mainly of gas and coal generation with some nuclear and wind : 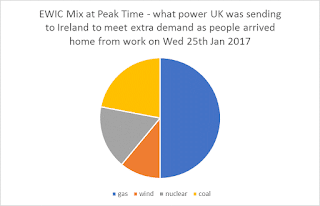 The generation mix for the day is given below  : 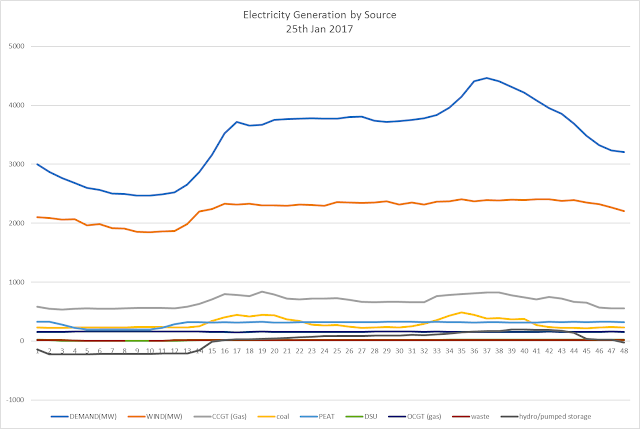