This week, two myths about renewables were exploded. First, Bord na Mona, announced that there would be job losses as they moved away from peat harvesting and changed their focus to renewables. Trade Union leaders have estimated that the job losses could be anywhere between 300 and 850 in the next decade.


Back in 2015, the Government were announcing wide scale job creation in their renewable energy White Paper :


And we are committed to supporting businesses, workers and communities to make the transition away from older energy technologies – in the direction of new jobs, new technologies, and new opportunities.


Our energy transition will present further opportunities for job creation and economic growth. For example, it has been estimated that measures required to meet our 2020 renewable energy targets could deliver between 2,500 and 5,550 jobs in the bioenergy sector and up to 4,000 in onshore wind deployment

The media lapped this up at the time. But now reality is hitting home. I for one, am in favor of moving away from peat but the only viable job creating and sustainable alternative is fracking or offshore exploration. The Corrib natural gas field created 1,000 jobs during development.

The other myth that was exploded this week was that wind farms are not damaging to wildlife. A UCC study that even RTE reported on showed that


Irish bird populations decrease in the areas immediately adjacent to wind turbines.The study found that the main reason appears to be the clearing of habitats during the construction of the wind farms.


In 2017, Eirgrid published a generation adequacy report that showed Northern Ireland in a net deficit position by 2021. 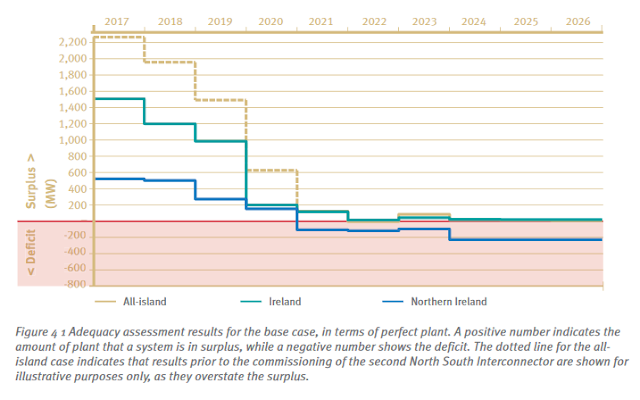 This was partly the justification for the North South Interconnector : 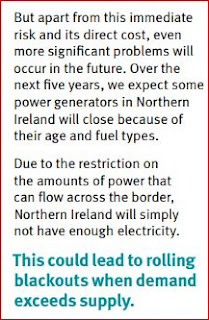 But now in Eirgrid's most recent report, there is strangely no longer a capacity shortage for Northern Ireland : 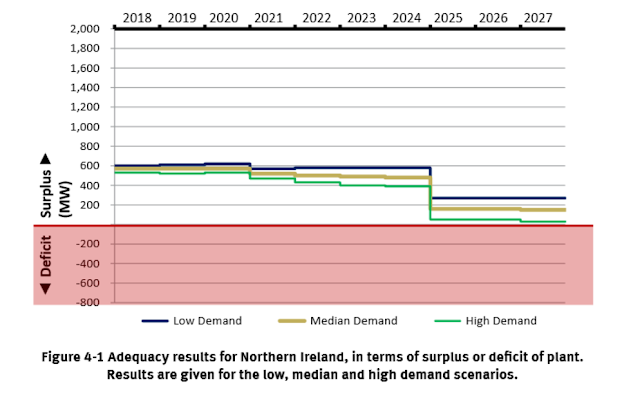 It seems that Kilroot power station will be kept open for another few years. But even then, there is still no forecast deficit.  This means that the only justification for the interconnector now is to ensure the iSem (All Island single electricity market) functions as a single market. But as Pat Swords showed, at a cost of € 286 million, the payback for the project would be around 25 years, something that would not stack up in the private sector.
Posted by Irish Energy at 13:37 No comments:

Three Reasons Why Wind Energy Policy Needs to be Reviewed

1) Wind has had a Negative Impact on Electricity Prices - many energy companies have stated recently that they will be increasing the price of electricity due to a rise in wholesale prices. Yet, we were repeatedly promised by the powers that be that more wind energy would lead to a reduction in wholesale prices and help reduce dependence on the fluctuating international fossil fuel markets. The fact is that the fall in wholesale prices was barely passed on to the consumer (see graph below). When fossil fuel prices were low, as they were in the past few years (oil hit $40 a barrel in 2016), consumers barely saw a reduction in their bills. Did you notice any reduction ? I sure as hell didn't. We all saw a noticeable difference at the petrol pumps. Why hasn't there been an investigation into this by the Energy Regulator ? 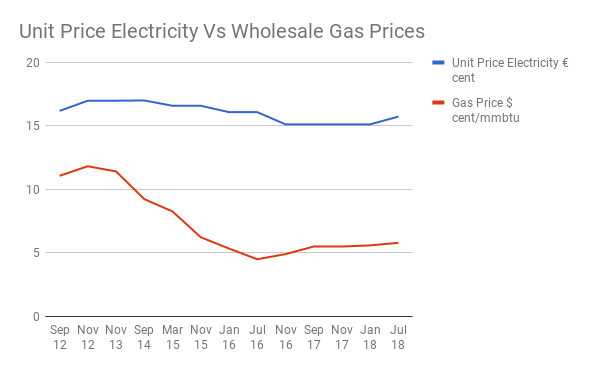 What impact have the 1500 or more wind turbines scattered around the country had on electricity prices ? As far as I can see, they've contributed to higher prices, with hikes in visible taxes like the PSO levy and unseen levies such as the extra grid costs required to transport all this "free energy" around the country.

2) Climate Change - Met Eireann warned last month that more extreme weather is on the way and that another heatwave summer is now twice as likely because of climate change. Other people like Professor Sweeney of Maynooth have said that these events might be even four or five times more likely. Regardless of what you think about climate change, there's an obvious question that needs to be asked - weren't the 1,500 plus wind turbines that we've built supposed to lessen the impact of climate change in Ireland by reducing the burning of fossil fuels and  carbon dioxide emissions?

If you've ever read through a planning application for a wind farms, you will see that climate change is regularly used as justification for the project.  Have you seen less storms recently or less prolonged dry/wet periods ?

Surely we should be seeing some kind of decline in these extreme climate events after spending around €5 to €6 billion on wind energy projects and another few billion on the supporting infrastructure.

Greenies can't have it both ways - if climate change is getting worse then wind energy is obviously not the solution based on past performance.

3) Prolonged Calm Periods - This summer has been catastrophic for wind energy with prolonged periods of little or no wind. If we are to believe the climate experts, more heatwaves are on the way in the future bringing with them anticyclonic regions of persistent high pressure. If wind has made little difference to electricity prices or climate change now, it will have even less in the future as they operate at lower and lower output. 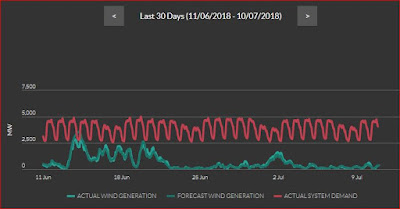 Wind energy has not been very profitable in Ireland with many companies struggling to make money and exiting the market. This can only get worse in the future. Who is going to bail them out ? Of course, we all know the answer.
Posted by Irish Energy at 20:47 2 comments: