The Northwest Passage Opens Up 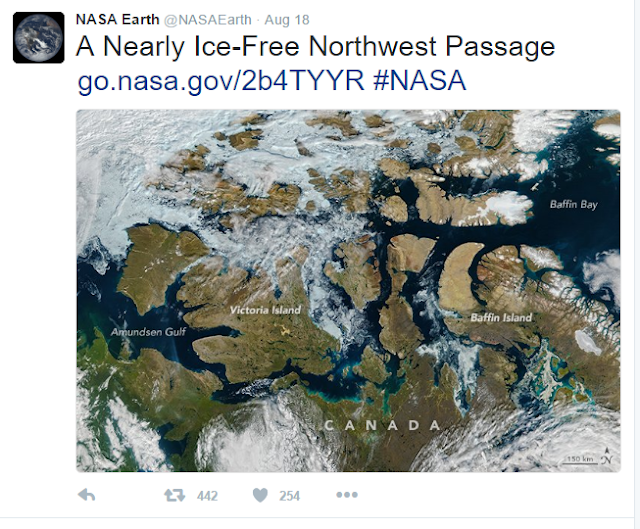 In mid-August 2016, the southern route through the Passage was nearly ice-free. For most of the year, the Northwest Passage is frozen and impassible. But during the summer months, the ice melts and breaks up to varying degrees. The Visible Infrared Imaging Radiometer Suite (VIIRS) on the Suomi NPP satellite captured the top image of the Northwest Passage on August 9, 2016. A path of open water can be traced along most of the distance from the Amundsen Gulf to Baffin Bay.

Compared with 2013, there is a lot less ice. You can view a comparison here.  I was interested to find out if this had happened before in recent history. NASA state that an ice strengthened ship could get through the southern route without too much trouble. Well, it turns out that a ship did just that in 1903 and 1905.

Captain Roald Amundsen, a Norwegian explorer, wrote about their voyage in Colliers Weekly (behind a paywall) 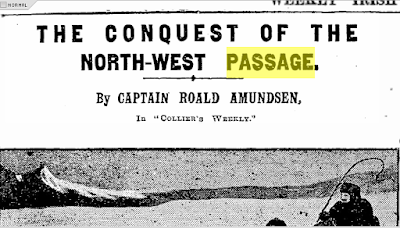 The ship did not face too much ice trouble on the Southern Route : 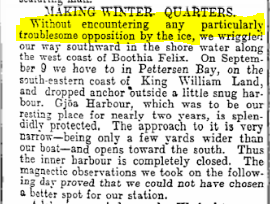 The passage they took was the exact same passage a ship today could take and at the same time of the year - August and September. They stayed on Gjoa Haven over the winter and the following year living and hunting with Eskimos. Then in August 1905, they sailed through a narrow rocky and icy passage to Amundsen Gulf.

I have shown the route they took overlaid on the recent August 2016 NASA image. It's precisely the same route that a ship could take today. This means there is little sign of warming in the Arctic since early 1900's and now. 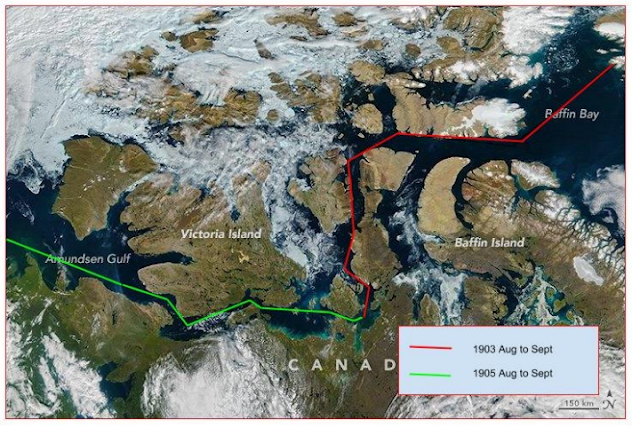 With the Northwest Passage conquered, Amundsen sailed to the nearest telegraph station - he had heard from whalers that Norway and Sweden had become independent.
Posted by Irish Energy at 14:11 1 comment:

Most EU Renewable Targets Will Not Be Met

While the media and lobbyists keep insisting that fines loom over us unless we act urgently and not wasting time to do a cost benefit analysis, what they don't tell you is that most EU countries are now on track to miss their 2020 targets. The EU have finally admitted that biofuels were a waste of time. Most countries are learning the hard way that other sources of renewables like wind and solar were not all that they were "cracked up to be" either.

Some ferocious overselling (and little analysis) has taken place.

The EU funded website Keep on Track shows which countries are on track and which aren't in meeting their 2020 renewable targets.

Here is the list of some of the countries NOT on track to meet their 2020 targets :

I would personally add Ireland to the list, we have done little on transport and heating initiatives, instead focusing almost entirely on wind generation. With about 20% of electricity consumption coming from wind over six or seven years, we have to make up another 17% by the next three years (in an increasingly legal quagmire).

That to me seems like a disaster for the EU and it's wall to wall green lobby groups. The question is will they admit they got it all wrong ?


The Green Party leader, Eamon Ryan, recently objected to the sale of land by NAMA in the Dublin Mountains. 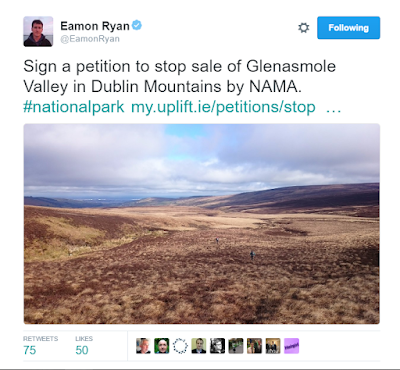 In June, The Irish Times said that there were plans for a wind farm on the Glenasmole Valley but that "Any attempt to put a wind farm on the site is likely to be resisted by conservation groups, trekkers and residents of the city and county."

It's amazing really that after 6 years of Eamon Ryan and his green cohorts of pushing wind farms on rural communities all around Ireland against their will, that they now resist a wind farm in their own locality.

This is NIMBYISM at it's finest.

Will The Lights Stay on in Ireland ?


A new report by the European Network of Grid Operators (ENTSOE) has shown that Great Britain may not have sufficient electricity generation capacity by 2020 to keep the lights on. This has a knock on affect here in Ireland where by 2022 it is envisaged that we will become more and more dependent on interconnectors.

ENTSOE have placed Britain at the highest risk level of grid blackouts in EU but state that expensive Capacity Mechanisms may prevent them from happening. For the layman reading, this is due to lack of investment in baseload generation - gas, coal, nuclear. Lack of sufficient baseload generation in UK means interconnectors to Ireland will lie idle (where Ireland is also strapped for reliable means of power to export to UK).

Eirgrid this year published their generation adequacy assessments up till 2025.

Take a look at the bottom section which excludes interconnection. Green means we have sufficient generation, red means we don't. By 2022, things start getting tight, by 2023 and 2014 we are in blackout territory, highly dependent on UK to send us spare power.

Of course, we have spent billions on new wind farms. But as ENTSEO state :


The contribution of RES [renewables] for adequacy purposes is less than for thermal plant.


I've dealt with this concept before - capacity credit.  Wind farms don't keep the lights on, power stations do.

There is a further problem for the Irish Grid operators - Eirgrid - and that is the new data centres that are been built around the country. They consume lots of power - Eirgrid estimate that if all the data centres that are contracted are built, they will add a whopping 1,700MW on top of peak demand of about 5,000MW. This would mean we get into the red a lot quicker.

There is a quick fix to this, of sorts, and I hinted at it earlier - Capacity Mechanisms. This involves load shedding - paying factories large amounts of money to close for a period and / or diesel generation which can ramp up alot quicker than power stations. Ireland had about 60MW of diesel generation in 2014 (referred to as Demand Side Units), we now have 230MW ! And Eirgrid have said :


The capacity of Demand Side Units in Ireland has increased to 230 MW, and is set to increase further.


How ironic that the green revolution, the de-carbonization of our grid, the clean, green future has lead to us using more and more diesel generation - the most polluting form of electricity production. And of course, our neighbours England are also going down this path.

Incidentally, the data centres will have back up power in the event of widespread blackouts. No, not windmills, yes you guessed it - diesel generators. The new Apple data centre in Galway will have 18 generators with a total capacity of 288MW. The new green revolution is upon us !

Posted by Irish Energy at 21:42 No comments:


A TV advertisement, featuring John F Kennedy, extolling the virtues of wind energy was yesterday deemed unlawful by the Broadcasting Authority of Ireland because the advertisement was politically linked to policy development and wind energy guidelines and was intended to influence government policy in respect of energy.

This proves that Ireland still has strong independent oversight in some areas. The complaint was made by Francis Clauson who owns the first Passiv House in Ireland. Amazingly, his annual heating bill is now lower than his PSO Levy bill, that is used to pay for wind turbines.

Unfortunately, the wind lobby was more effective than the Passiv House lobby.

Full article on the wind advertisement can be found here.


It appears that reality is beginning to bite at The Irish Times in view of the many large industries (some of the biggest employers in the country) complaining about the rise in PSO Levy to fund more wind farms.


In a submission to the CER before it arrived at its final decision, tech giant Microsoft, which employs 1,200 people in the Republic, said this penalises large energy users who are holding energy capacity in reserve to meet anticipated growth.

The multinational also points out that the rate at which the PSO has increased over the last five years represents a “rate shock” for large energy users and “puts the Ireland energy market at a disadvantage”. In a similar vein, Irish food and ingredients giant, Kerry, which employs 4,000 people here, warns that the charge will damage its competitiveness.

Irish Energy Blog has been warning about this for years now, but the warnings have fallen on deaf ears. The Irish Times have been calling for more renewable energy for a long time now and have allowed the wind industry to spread their propaganda far and wide. To be fair, they were not the only ones.

The only journalist that is going to come out well of this is Colm McCarthy. Of course, there will be no accountability for what will happen in the next few years. An exodus of large companies coupled with a hit from any prolonged Brexit negotiations will see us well back in recession and rising unemployment once again. At a time of record low oil and gas prices.


I've written previously about the economics of electricity generation here.

The Hinkley Point debacle has confirmed my analysis. Modern power stations have become uneconomical to run, investors demand large subsidies as incentive to build them, governments have to keep the lights on while satisfying the ever increasing demands of the greens and their cohorts in the renewable unreliable energy industry.

It can only end in disaster, unless that is, Greg Clark and Theresa May can bring normality back to the post Brexit UK energy market.

They will need to move quicker on the Article 50 button before the lights go out.
Posted by Irish Energy at 22:17 2 comments: