Higher Levels of Back-Up for Ireland's Renewables Based Grid

The grid operator in Ireland has always required back up generation, known as operating reserves, in the event that a power station fails which could cause a widespread blackout. Usually, these are powered by fast acting fossil fuel plant which can be switched on in an instant. But Ireland's transition to a wind powered based grid has not resulted in less back-up, but more back-up generation which obviously has an impact on the ability of wind to reduce emissions.

The first table below is from a few years ago and shows four different types of operating reserve with a minimum requirement of 110MW during the day and 75MW during the night. 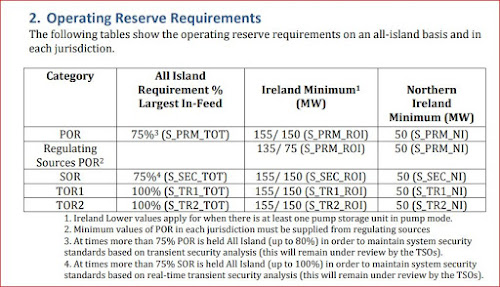 The occurrence of high demands for replacement reserves is
mainly driven by a high number of simultaneous forced outages that happens
simultaneously to relatively high wind power. The value of these peaks tends to increase with increasing wind power capacity installed."

In another 2005 study by R. Doherty and M. O’Malley of UCD Dept of Electronic and Electrical Engineering, titled “A new approach to quantify reserve demand in systems with significant installed wind capacity” it was stated that :

The methodology is applied to a model of the all Ireland electricity system, and results show that as wind power capacity increases, the system must increase the amount of reserve carried or face a measurable decrease in reliability [i.e. increase the risks of a blackout - blog note].

So this was well known, that as you increase wind energy, the grid becomes more unstable, and more back-up reserves are needed. It's becoming increasingly clear that Ireland has already reached it's limit on wind generation, where the benefits are more than offset by the costs.

Contrary to public opinion here in Ireland, Irish officials were among the worst in handling the Covid-19 crisis  in the EU/EEA area when compared with countries of a similar size.

Hungary has a population of nearly 10 million, almost double that of Ireland yet has only 6,000 cases of Covid-19, nearly five times less than Ireland.  Many in the Irish media who have been very critical of Hungary in recent years should take heed.

Only Austria has a similar amount of cases as Ireland, but they have about another 4 million people so on a per capita basis, Ireland has twice as many. The only comparable country is Sweden which has double the population but three times as many cases.

So Ireland has only handled the crisis slightly better than a country that choose not to impose a lockdown. The measures implemented here in Ireland have failed. Right from the start, the idea of closing down our borders was rejected, a rejection of common sense - the virus cannot travel on the wind.

The focus on pubs and restaurants and lockdowns was misplaced, instead the focus should have been on nursing homes, meat factories and direct provision centres, most of which is a failure of our immigration and housing policies which results in large numbers of people living together in the same accommodation.

Re-evaluating the Need for the North South Interconnector

The benefits of the interconnector are clear, not only that it will improve security of supply and reduce energy costs for consumer but crucially will allow Northern Ireland to increase its capacity to handle renewable energy, which currently accounts for around two-thirds of all electricity generated.

Somewhat unsurprisingly, nobody in Ireland or the UK has thought to re-evaluate the need for the North South Interconnector given recent developments. The same lines are still being trotted out. I will deal with each below.
1) Security of Supply - According to Eirgrid the recent capacity auctions were designed by the electricity regulators in Ireland and Northern Ireland to ensure sufficient capacity is secured to meet demand across the island. So therefore, Northern Ireland already has sufficient capacity. Also, electricity demand is now reduced due to the covid pandemic so what exactly is the supply issue?
2) Renewables - If renewables currently accounts for around two thirds of electricity in Northern Ireland, then they are very close to meeting their target of 70%  so why is there a need for such significant investment at all to increase renewable energy if they are 94% of the way to achieving their target without it  ? Furthermore, if both the North and South of Ireland are well on track to meet their 2020 renewables targets as is being publicised, then surely there is no need for sending renewable energy across the border, given that maintaining synchronous, ie non intermittent, generation is the priority during periods of high levels of renewable energy.
3) Savings - the figure of €20m (all-island) is consistently quoted. This is roughly €5m (£4.5m) for NI. These figures were based on a number of assumptions from at least 6-7 years ago. A lot of things have changed since then. Even if the figure is still correct, to put it into context, the Utility Regulator of NI gave kilroot a side deal worth £14m in a single year after the power station lost out in the first auction process. So the significant sums of money could be put to better use i.e. upgrading power stations and implementing measures that would reduce demand and consumption.
Posted by Irish Energy at 09:30 3 comments:

Coldest July in Over 30 Years

Global Cooling has officially begun in Ireland as July 2020 was one of the coldest in the last 30 to 40 years :

This is based on six different weather stations from all regions of the country, all showing divergences of at least one degree from the mean of 1981 to 2010, with Finner Camp in Donegal, showing the greatest divergence of 1.7 degrees.

Of course, you will have noticed that July 2018 and 2019 were warmer but the magnitude of the divergence from the mean was greatest in 2020, double that of the others which makes July 2020 statistically significant :