Can Ireland realistically meet its renewable targets by 2020 ?

Ireland has a target of 40% of electricity consumption from renewables by 2020. It is at around 20% at the moment. It is envisaged that the vast bulk of the targets will be met by wind generation. This graph shows how wind has been doing in the past few years:

The first thing that struck me is that the graph seems to be an inverse of a graph I published on a previous blog in relation to CO2 intensity (the third graph in that link). So the same logic applies - adding more wind to the system does not necessarily lead to an increase in the fuel mix for wind. Some 300MW of wind was added between 2011 and 2013 but we are still at about 16% of total fuel mix for electricity consumption. There's been a slight increase of just over half a percent from the position of wind in 2011. If we extrapolate this growth rate out to 2020, we come out with a fuel mix percentage figure for wind of 20.5% in 2020 (with a total installed wind capacity of 3,944MW). When you add in the other renewables (assuming Moneypoint won't be converted to biomass), unless a miracle occurs and God grants us high consistent wind speeds just below the cut out speed for a wind turbine, we will be well under the target of 40%.

So one has to ask what exactly are the Irish authorities expecting from this huge over investment in electricity generation ? Even if they somehow manage to push through the planning system another 1,000MW to bring total wind capacity to 5,000MW, this will only bring us to 22%, with a total figure for renewables of 26% - 28%. They may be banking on an increase in large industry using their own diesel generation power, reducing demand, and increasing the fuel mix that way. But diesel generation capacity, (known as Demand Side Units), only stands at 160MW at the moment. Its hard to see it making a big impact, but is certainly one to watch in the future. This form of generation will appear off the books as most of it will be off grid so to speak. It's purpose is to reduce electricity consumption from the grid. In any event, one wonders how an increase in diesel generation is making a transition to sustainable forms of electricity generation.

Will the European Commission fine Ireland for not meeting its targets ?

Much is made in the Irish media of fines from Europe of €400 million for not meeting the targets. In reality, it takes many years of proceedings in the European Court before it ever reaches a position that a Member State is fined. In fact the number of times this has happened in the whole history of the EEC/EU is still in the teens. There is a website funded by the EU’s Intelligent Energy Europe Programme ‘Keep on Track’, whose function is to track the progress towards the EU’s 20% renewable energy by 2020 programme :

The website’s press release of 6th October 2014 could not be clearer:

“14 EU Member States will fail to meet their 20% renewables target by 2020, as progress stands today”.

Indeed France, Spain, UK and Poland are not expected to meet the targets : 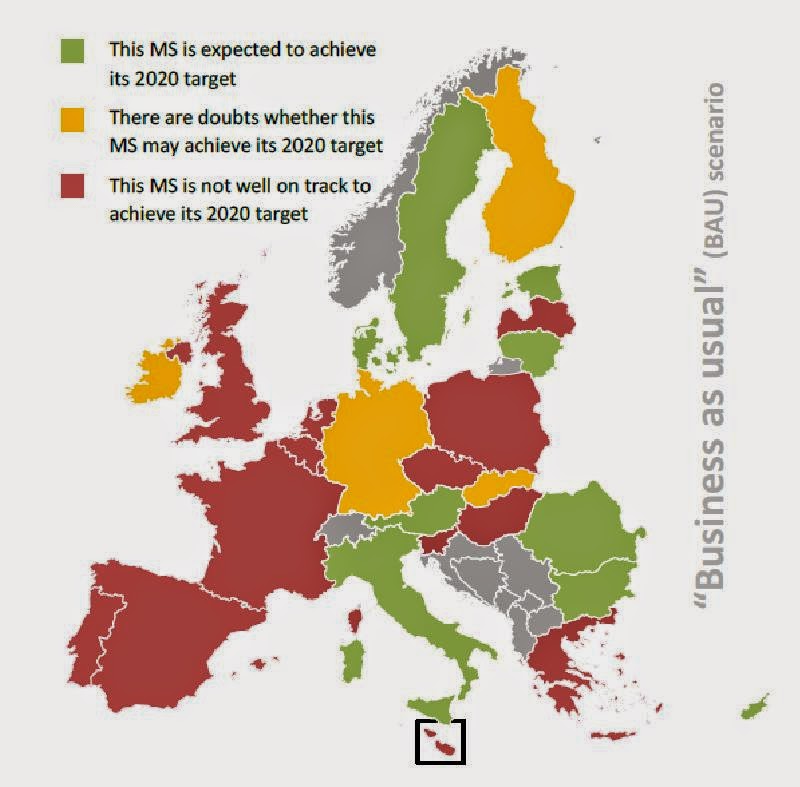 And Germany is now in doubt after a reform of their renewable supports (EEG) in August 2014, which reduced significantly the previous generous renewable subsidies. This reform gained popular support due to the soaring electricity prices, amounting to a doubling of electricity rates, since these renewable supports were introduced in 2000. So it is clear Ireland will not be alone. Take for example Poland. 90% of Poland’s electricity comes from coal and the Polish Prime Minister, Donald Tusk, last year stated that (see link at bottom of page) :

The EC is also on a slippery legal footing when it comes to Member States Renewable Action Plans. In relation to Ireland, there are many complaints that our NREAP (National Renewable Energy Action Plan) prepared back in 2009 completely disregarded the provisions of the Aarhus Convention and International Environmental law. There was for example, no consideration of alternatives, no cost benefit analysis, no quantification of emissions savings, no Strategic Environmental Assessment, inadequate provision for public participation (only a two week timeframe), no means for members of the public to get affordable access to justice. One of the main principles of the Aarhus Convention, now ratified by 47 members, (eventually and begrudgingly by Ireland in 2012), is that the public should have a say in plans that affect the environment when all options are open. But the door has been closed on the public since 2009 after a poorly advertised two week consultation and the Irish State pressed ahead with large scale wind energy development plans.

A complaint by a chemical engineer, Pat Swords, was accepted by UNECE Meeting of the Parties (which is the 47 countries to have ratified the Convention) in July this year :

So we now have the above declaration in International Law, which is automatically a breach of Community and National Law. This decision requires :

"that the Party concerned [the EC] ensure that the arrangements for public participation in its member States are transparent and fair and that within those arrangements the necessary information is provided to the public. In addition, such a regulatory framework and/or clear instructions must ensure that the requirements of article 6, paragraphs 3, 4 and 8, of the Convention are met, including reasonable time frames, allowing sufficient time for informing the public and for the public to prepare and participate effectively, allowing for early public participation when all options are open, and ensuring that due account is taken of the outcome of the public participation. Moreover, the Party concerned must adapt the manner in which it evaluates NREAPs accordingly"

In essence not only does the Commission have to report on progress on the above to UNECE in December 2014, it already having being determined that progress to date has been inadequate with regard to its International Treaty Obligations, but proceeding further with the NREAP in Ireland is a breach of International, Community and National law, for which liability will most definitely ensue.

So we can see the difficulties the European Commission, itself having breached International Law in relation to the acceptance of Ireland's plan for meeting the targets, will have with taking Ireland to task over failing to meet those targets. In fact, the onus is now on the Commission to sort out the legal failings in Ireland's renewable plan.