The Limit on Wind and Interconnection in the System 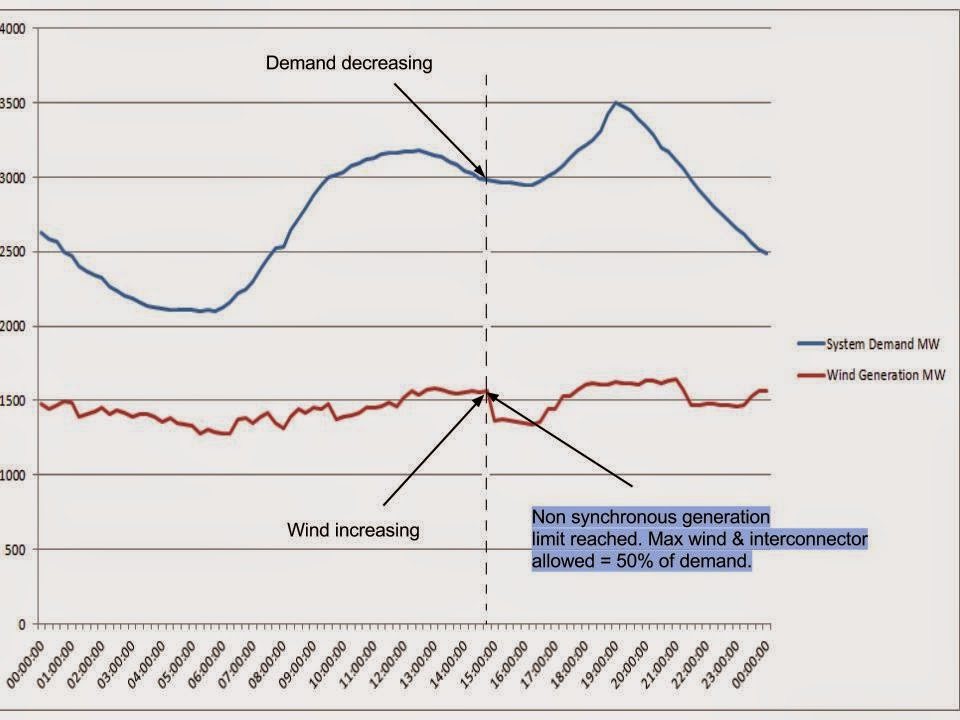 At present, the maximum amount of power from wind generation and interconnection that can be accommodated into the grid at any one time is 50%. This was confirmed by Eirgrid in their System Operational Constraints update back in March this year. In March, when the capacity factor of wind was 33%, this limit had been reached, with the excess wind power "constrained" off.  In December 2013, when wind had a capacity factor of over 50%, this limit was met on twelve different days.   Given this situation, it is curious that the current Irish energy policy revolves around more interconnection and more wind.

The problem is that wind and imported power provide "non synchronous" power which is incapable of providing the type of stable power produced from conventional sources. Exceeding this limit of 50% will alter the frequency of electricity sent to houses and factories damaging equipment and tripping the switches on the grid causing a blackout. There are efforts underway to change what is known as the "rate of change of frequency" (RoCoF) to try to accommodate more non synchronous generation but it is still not known if conventional plant can withstand these fluctuations or operate at the ranges required. Conventional generation operators claim that it could take several years before these questions can be answered. They are also worried about the costs involved with no additional benefits for them. Presumably, the consumer will eventually pick up the cost for this potentially disastrous experiment.

Eirgrid are now using a new computer tool since May called WSAT (Wind Security Assessment Tool) which monitors the amount of non-synchronous generation in the system at any one time. An example of the limit being reached recently can be seen on the 18th October (see graph above). At 14.45 during the day, wind generation was hovering around the 1,500MW mark. It had begun to rise further as demand had begun a downward trajectory. At this point demand was 2,985MW, Wind 1,561MW and the East West interconnector was exporting 54MW to the UK. The net non-synchronous power was 1,507MW, 50% of demand. Eirgrid then "shut off" 200MW of wind to bring back stability to the system. The new Great Island CCGT gas plant (presumably on testing mode) saved the day ramping up quickly to fill the gap. North Wall and Aghada OCGT also provided some additional peaking power from a more inefficient gas source.

So the next time you hear someone talking about powering the electricity grid with 100% wind or a politician talking about the need for more interconnection, you will know they are talking beyond their expertise.
Posted by Irish Energy at 22:30