Earlier this year, SEAI issued a report, which concluded that there was a saving of € 177 million in fossil fuel due to wind generation in 2012, titled "Quantifying Ireland's Fuel and CO2 Savings from Renewables". The report has a number of flaws. Here is a sample of some of those flaws :


The Impact of Wind on Reserve Requirements

The occurrence of high demands for replacement reserves is
mainly driven by a high number of simultaneous forced outages that happens
simultaneously to relatively high wind power or load forecast errors. The value of these peaks tends to increase with increasing wind power capacity installed."

In another study by R. Doherty and M. O’Malley of UCD Dept of Electronic and Electrical Engineering, titled “A new approach to quantify reserve demand in systems with significant installed wind capacity,” it was stated that :

The methodology is applied to a model of the all Ireland electricity system, and results show that as wind power capacity increases, the system must increase the amount of reserve carried or face a measurable decrease in reliability [i.e. increase the risks of a blackout - bloggers note].

[Note that in these reports, they assume that increased wind capacity (i.e. building more wind farms) will result in higher wind penetration in the system (i.e. higher levels of wind relative to demand)]


Lets have a look at the Regulations : 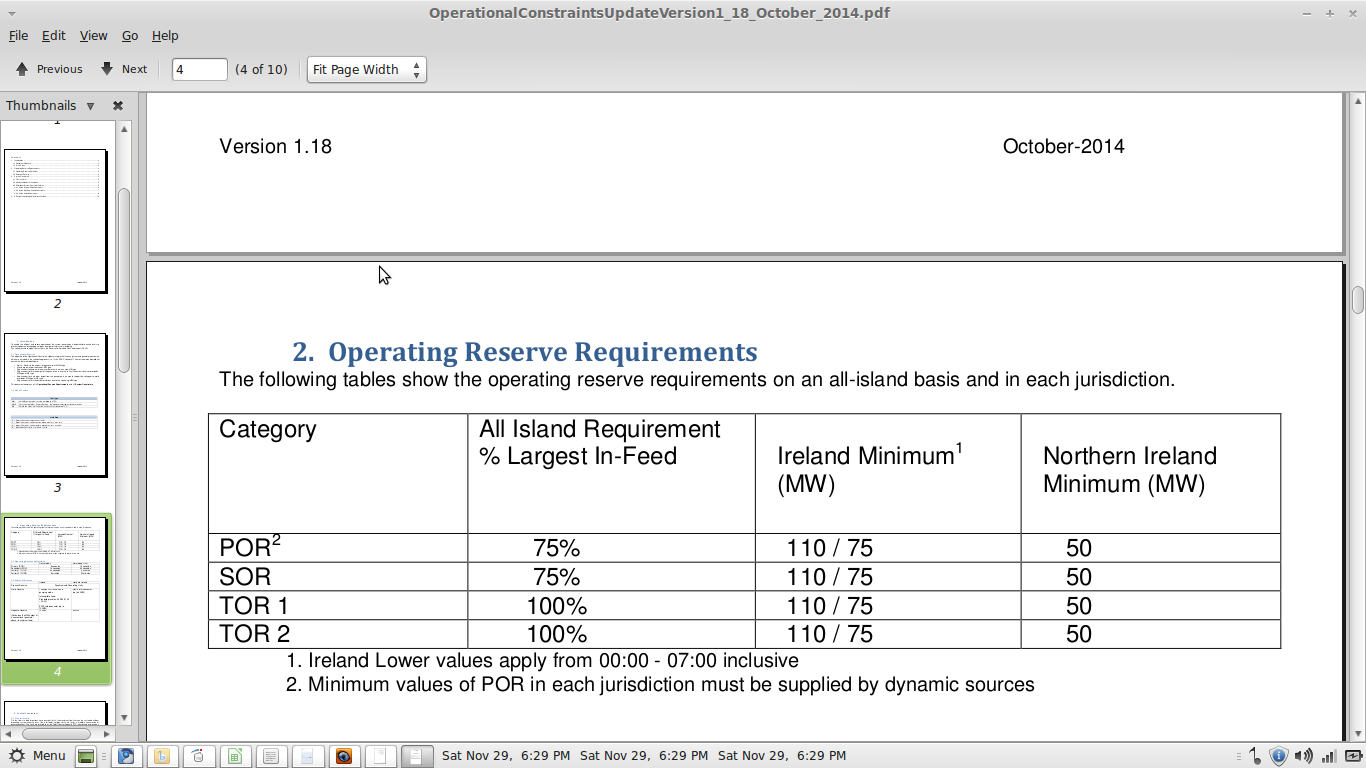 That's right, this is the Minimum amount of reserve that must be maintained. It is then at the discretion of the TSO (Eirgrid) to increase this depending on circumstances.

Reserve requirements are not influenced by wind generation or other renewable electricity generators at current levels of installed capacity. [SEAI]

However, it was still possible that there could have been high levels of wind penetration in 2012 (which would have resulted in increased demand for reserves).


The All-Island grid study showed that additional reserve requirement in hypothetical 2020 scenarios is related to the amount of wind installed but that the largest contributing factor remains the loss of the largest conventional unit [SEAI].

The study SEAI are referring to is the same report by Danish scientists mentioned above. But what the study actually says in relation to this is :

There should be enough spinning reserves to cover an outage of the largest unit in combination with a fast decrease of the current wind power production. However, the capacity of the largest online unit changes dynamically. (Doherty and O’Malley 2005) further demonstrate the dependency of the demand for TR1 [Reserve Type 1] from the installed wind power capacity.

SEAI also argue that the system in Ireland is flexible enough to accommodate fluctuations in wind anyway without the need for additional reserve. But as you can see in the example previously mentioned (see here), you can see where two CCGT plants, namely Huntstown and Great Island, stepped in from reserve to cover the loss in wind power on the 3rd November. None of the online plants were flexible enough or had enough spare capacity to provide this cover.

We can look at the impact of wind on reserve with a very simple example. Say, that we end up with a system, where 100% of the wind can be allowed in to meet 100% of demand and this occurs for a whole day. By the following day, 20% of the forecasted wind drops off, and then later in the day 50% of the remaining forecasted wind drops off. By the 3rd day, wind is only providing 5% of demand. Now let's pretend that we do what SEAI say we should do and maintain 480MW-500MW of reserve. Remember, Reserve requirements are not influenced by wind generation. As the 20% wind drops off, we will be able to call on the reserve by ramping up the reserve generators to full output to fill the gap. We must now put replacement reserve in place. Again, this is not affected by the wind so 500MW will do fine. But now we come to later in the day where circa 1,500MW wind has dropped off. We use some of our fast acting (but small capacity) units to try to fill the gap along with the other slower replacement reserve. But there is simply not enough of the slower acting, larger capacity reserve ready to step in. Time has run out and we are now facing Blackouts. So it is clear from this example, that you have to increase the minimum reserves to cover nearly every MW of wind in the system, thereby negating most, if not all, of the fossil fuel or CO2 savings (actually potentially increasing them because the back-up plant have to run on low loads). The wind, itself, in effect, becomes the largest in-feed unit. You can get away with lower reserves at lower levels of wind, but you simply can't take this risk at higher levels.

So, there is no debate on this - increasing wind penetration above a certain level, leads to an increase in reserves. I would put the line at 1,000MW in the Irish system, as now we have the equivalent of two large thermal plant that can drop out at any time and in any sequence and is much more likely to drop out than if they were in fact, two thermal plant. The exact amount can be debated but I will now come to a problem with the report, that presents a fundamental issue for those who are now using it to inform energy policy and public debate. It is there, written down exactly as quoted here, on Page 12, and can't be debated or argued over, or fudged, or ignored, or interpreted in some other fashion.

The main problem with this report is that it gets trotted out by SEAI and policymakers as the basis for installing more wind farms. But, like with previous SEAI reports, there is a huge disclaimer in it, that most people who have read it may well have missed. That is why I put it in bold above. But it deserves repeating and repeating again :

So I ask the question, why is this report, long outdated and now redundant, since it is based on 2012 levels of wind in the system, trotted out and used as justification for more wind farms when what it really is saying, just like all the other reports mentioned above, (albeit begrudgingly in this case) is that the integration of more wind in the system will require more fossil fuel reserves ?