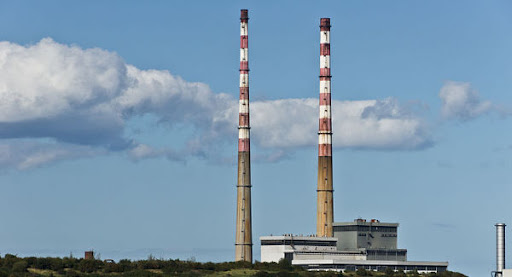 Let's look at the annual constraint payments for the last few years :

2010 and 2012 were years with relatively poor capacity factors for wind. The other years had average to high capacity factors. In these years, we see higher levels of constraint payments as there was more unpredictable wind interrupting the scheduled generation for conventional plant . By 2014, the payments hit a peak of € 175 million due to two factors -  saturation of wind in the system and the new interconnector which provided power from cheaper sources such as coal.  We can see which direction the payments will go when we add more wind into the mix. To put the € 175 million into perspective, SEAI claimed that wind energy resulted in € 177 million in fossil fuel savings in 2012.

EirGrid and SONI foresaw these increased constraint costs in this report :

Wind is inherently a variable resource. The UUC market schedule [done after the event], with perfect foresight, can schedule the most economic generation to balance this variability as it knows exactly the level of wind output in every period. The TSO, on the other hand, since it is not always aware of the timing or extent of these variations, must balance them using a combination of part-loaded plant and more expensive fast-start plant. This less optimal schedule will cause an increase in constraint costs.

The generation portfolio has changed in recent years due to closures of mid-merit plant such as Poolbeg Units 1 and 2 [blogger note - these are the two plant which used the famous, now redundant, chimney stacks in Ringsend, Dublin pictured above], and the long-term forced outages of a number of other mid-merit and flexible generation units, such as North Wall 4 and Turlough Hill. In addition, transmission constraints limit output from Aghada Unit 1 and the Aghada Gas Turbines at times, further limiting the available generation portfolio. This deficit of mid-merit units that can start with relatively short notice periods has resulted in a reduction in portfolio flexibility for reacting to unexpected changes in generation and demand. Previously, when these units were available, uncertainty over generation, wind and load could be managed within 1 to 2 hours using these flexible mid-merit generator units.

At present, any potential capacity shortages due to generation, wind and load uncertainty in the future require commitment decisions to be made a number of hours in advance due to the long notice periods required by the generator units available to meet these shortages. Operators are required to call units with long notice periods further from real time when there is greater uncertainty about forecast accuracy, thus increasing the likelihood that dispatch diverges more from the optimal solution.

These commitment decisions are made to mitigate against the risk of a capacity shortage
and to ensure that sufficient replacement reserve is maintained to deal with any further
changes to generator availability or forecast demand or wind. Availability of generation with shorter notice times would mean that such commitment decisions could be made nearer to real-time and with better information.

A provision of €3.8m has been included to account for divergence of dispatch from the
optimal solution due to generation portfolio changes. The return of Turlough Hill is expected to have a positive impact on the flexibility of the generation portfolio and the return of these generator units has been incorporated in the provision. So in otherwords, due to wind forecasting problems, there is further unpredictability in the system for conventional generators


So plant that could start up quickly (but were inefficient) were closed down and replaced with slower starting more efficient plant. This shouldn't be a problem as it should lead to more efficient use of fuel. But because it gets more difficult to forecast the wind accurately, particularly when at high penetration levels, you have to compensate these plants when they are forced off the grid by wind (which has priority dispatch) and forced to run differently to schedule.

Each plant is given a production schedule for the day. The older plants were given a schedule an hour or two before production because they could switch on quickly. But the slower modern plants have to be given their schedule up to 8 hours or more before production. The problem is that with high levels of variable wind in the system, this schedule is bound to change and plant must be compensated for these changes. Otherwise, they go out of business (which is not a good idea if you want to keep the lights on).

With wind energy now embedded in our electricity system and indeed in our energy policy, constraint payments are something we will all be paying for long into the future. It is another example of how wind adds complexity to the electricity system. A general rule in economics is that complexity costs money. You can imagine the level of office staff required to calculate the above for each and every plant in the country each day of the year. While nobody begrudges anybody a job, surely a limit needs to put on these added complexities if we want to remain competitive.