Emlagh Wind Farm is a 120MW wind farm, consisting of 47 turbines, planned for North County Meath. It is sited near the historic town of Kells, an area of unique cultural and historic heritage, that attracts many tourists each year. Kells is most famous of course for the Book of Kells which dates back to the 6th Century.

The benefits from the proposed wind farm would have to be very significant to justify it's imposition in such an area. A decision on the wind farm was due in late September but An Bord Pleanala have delayed this until November 26th.


The best way to measure the value of a wind farm is by calculating it's capacity credit. This is the equivalent amount of conventional power plant that can be shutdown as a result of the new wind farm. It is used by Eirgrid to measure the contribution from a new generator to generation adequacy.

“Although the expected large growth of installed renewable capacity will increase portfolio diversity, it will only offer a limited contribution to generation adequacy.”


The capacity credit curve for wind used by EirGrid in the Generation Adequacy Report 2009 – 2015 is presented in the below Figure: 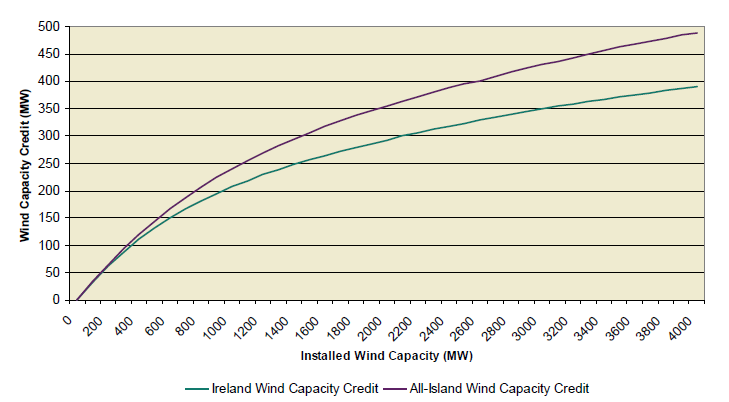 Figure 1, the capacity credit attributable to wind declines with increasing installed wind capacity. The capacity credit for Wind Power Generation (WPG) was predicted by EirGrid to decrease from 19% in 2009 to 12% by 2015 as illustrated in Table below:

From Table 1 above, it can be seen that Emlagh Wind Farm will have a capacity credit of 12.5% in 2015 (total capacity has not reached predicted 2015 levels). At an installed capacity of 120MW, this then represents a contribution to generation adequacy of just 15MW (equivalent to just 3-4% of a conventional gas plant). This means that should there be a security of supply issue in Meath or the surrounding region, then new conventional plant will need to be built to keep the lights on, despite the large investment and environmental impact of this wind farm.


The following statement made by the Emlagh Wind Farm developer in their Environmental Impact Statement then, is completely at odds with the accepted method of accounting for wind farms in the energy industry:


“Should the wind farm not be developed, fossil fuel power stations will be the primary alternative to provide the required quantities of electricity. This will further contribute to greenhouse gas and other emissions, and hinder Ireland in its commitment to meet its target to increase electricity production from renewable sources and to reduce greenhouse gas emissions. Ireland currently imports up to 85% of our energy. Emlagh Wind Farm offers Ireland an indigenous form of electricity, and provides for security of supply against our dependence on imports.”


But when measured scientifically, the wind farm will not be an alternative to fossil fuel power stations. Instead, a duplicate system will be required, with a need for new transmission infrastructure running alongside existing lines to be built - one powered by fossil fuel, the other by wind (when available).

A contribution of 15MW for 47 turbines is a very poor benefit given such significant environmental (and indeed economic) costs.
Posted by Irish Energy at 15:45