Back in May of this year, Irish Energy Blog published an article questioning Eirgrid's demand forecasts. It was the only media outlet, as far as I can tell, in the country to do so :

In Eirgrid's recent capacity statement, given a recovery scenario, demand for electricity by 2019 is forecast to equal demand at the height of the boom and after this it is forecast to exceed these levels. Ireland, like the UK, has a low energy to GDP ratio. We barely manufacture anything here, most of it is outsourced to China and India, so what exactly are Eirgrid expecting ? Perhaps there will be another industrial revolution, this time in Ireland. But in any event, I will put my blogger reputation on the line, and predict that these demand levels will not materialize. The rising cost of electricity for industry will surely drive any heavy industry out that might consider re-locating here - Irish Energy Blog, May 2015.

Many, if not all, reputable Irish newspapers published the view that new grid infrastructure was essential for increased demand without any question:

Others have identified “hidden” network costs they argue are necessary to facilitate wind. It is true that Ireland is currently modernising an electricity network that for many years suffered from chronic underinvestment. Current investments also support traditional generation, increased demand in the regions, and indeed a more responsive, intelligent and modern grid generally - Joseph Curtain, Irish Times March 2015.


Launched in October 2008, Grid25 is based on energy demand growing in the coming years - Paul Melia, Irish Independent, November 2014.


The CEO of Eirgrid has now confirmed that Irish Energy Blog was in fact right :


Before the crash, construction made up a significant proportion of the GDP growth in the economy. I think we are all acutely aware that before the crash it accounted for more than 20% but now it is below 10%. What is driving economic growth today is very different. That in part is a reason the relationship between GDP growth and energy growth has changed. One no longer gets the close correlation we had in the years between 2000 and 2007 between GDP growth and energy growth. The make-up of the economy is different and cost competitiveness has become a significant focus for industry. Energy has become one of the areas where businesses have become acutely conscious of the need to manage their costs to ensure competitiveness. We only have to look at yesterday's announcement of the unfortunate closure of the Michelin plant in Ballymena to understand the impact of cost competitiveness on the sustainability of businesses. Businesses are much more conscious of managing energy costs. We are seeing the new standards in housing coming through in the new housing stock, so the use of energy per unit of residential housing is not as good. For all those reasons growth rates in energy are now not as correlated with growth rates in GDP - Fintan Slye, November 2015.

The reference to GDP is very interesting, this blog made that exact same point last May - Ireland, like the UK, has a low energy to GDP ratio.

The draft strategy reflects the change in economic circumstances and where we as a country, an economy and a society are now. When first developed in 2008, Grid 25, as it was then named, which included plans for the Grid Link project, was designed to ensure the electricity grid would continue to support the Celtic tiger economy with its high economic and energy growth rates. The past five years have changed that reality. There has been demand reduction to the point where estimated demand levels for 2010 will not materialise until 2025 - a 15-year delay - and, even then, growth rates will be less than a third of the rates previously forecast - Fintan Slye, November 2015.

This blog also pointed out this very fact - Grid 25 was based on the below graph - it didn't take a genius to figure out that things had changed since : 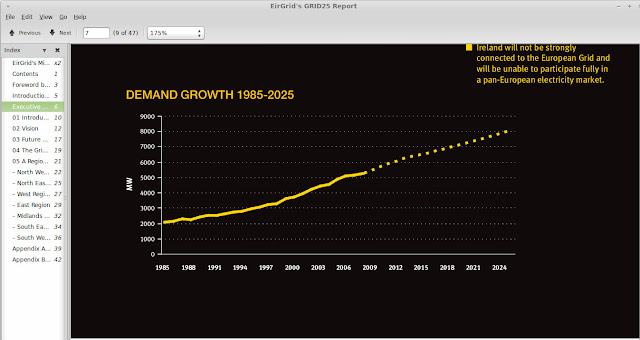 However, I still wonder whether the pylons will be required for wind farms in this region should they get planning. I would imagine the answer to that question is Yes. Do Eirgrid envisage that these wind farms will not receive planning permission ? The original document from which the above graph was taken is now unavailable and so one can't check but for certain I can remember reading in it that connection of renewables was another justification for the project.

Eirgrid's current statement on Grid Link seems to confirm that they are still accounting for more wind farms :

The Irish government committed to the EU that 40% of electricity generation would come from renewable sources by 2020. To achieve this target, EirGrid needs to connect significant levels of renewable energy in the south and east. As a result, we must improve the transmission grid in this area. We can then bring this new power from renewable sources and supply it to the entire country.


Finally, it's important to note EirGrid's legal obligation to connect electricity generators. As the national electricity transmission system operator for Ireland, we have a statutory function. Subject to direction from the regulator, this statute requires us to offer a connection to the grid for those who request it. When an electricity generator accepts our connection offer, we have to meet their needs. This means we are legally required to develop the grid in response to plans for new electricity generation, such as wind farms.