As far as I know there has never been a study of actual savings, that is, outside computer models, due to wind in the Irish system. The Environmental Protection Agency (EPA) publish fuel consumption data for most power stations in the country. I have included the East West interconnector (EWIC), in terms of equivalent gas consumption based on the power it generated, as it displaces gas generation in Dublin (as it turns outs its output was very similar for both years).


2013 and 2014 are very good years for comparison purposes as electricity demand for both years was roughly the same, with a less than one percent increase in 2014.

The graph below shows the gas consumption for the six main gas plants (and EWIC) in Ireland for both years. No fuel data for 2014 was available for Whitegate so this was estimated based on electricity generated. 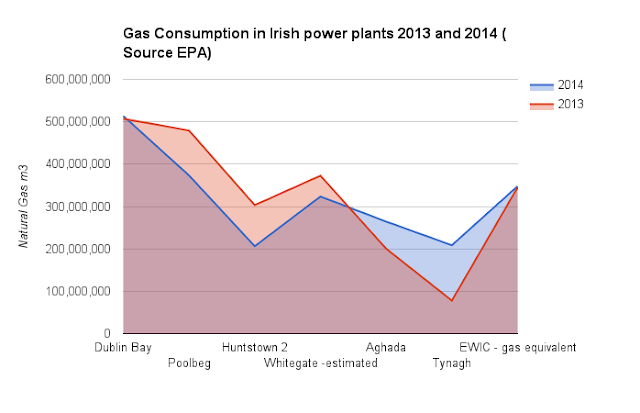 As one can see, both years look very similar. In fact, it works out at a 2% reduction in 2014 from 2013 levels. Approx 367MW of wind was added in this period. As wind energy displaces mostly gas generation from the grid, this works out at a very poor investment. With wind energy costing approx €2 million per MW in Ireland, an investment of € 730 million in wind turbines saves approx € 11 million of gas imports. The payback over the lifetime of these turbines (say 20 years) works out at total gas savings of € 220 million, with the capital investment never recovered in terms of the amount of gas fuel saved, which is what the wind turbines were designed to do in the first place.


This shows that the saturation point of wind energy in the Irish system has been reached. Whilst the Greens will argue that you can never have enough wind, this is a technically ignorant view, for many reasons pointed out previously on this blog (the technical limit of wind, the requirement for baseload plant, etc ).

We can see that output of wind increased from 4,231GWhrs to 4,731GWhrs but this only marginally reduced gas consumption year on year, as shown above, by 2%. This proves that although more wind energy was allowed into the grid, the gas plants simply ran behind the wind as back-up.

Certainly, there may have been larger savings in previous years but it has been well known that these savings diminish once you exceed optimum wind penetration levels.

For instance, Eirgrid in their 2010 Adequacy Report :

Analysis of wind data has established that this capacity credit is roughly equivalent to its capacity factor at low levels of wind penetration. However, the benefit tends towards saturation as wind penetration levels increase. This is because there is a significant risk of there being very low or very high wind speeds simultaneously across the country. This will result in all wind farms producing practically no output for a number of hours (note that turbines switch off during very high winds for safety reasons).

However, it is an unfortunate fact that the contribution to adequacy of additional amounts of wind decreases progressively and tends towards zero. Consequently, the incremental capacity credit of increasing WPG tends to zero. With increasing amounts
of Wind capacity the total plant rises significantly but the amount of non-wind plant only
falls off by a relatively small amount. In fact the amount of non-wind plant reaches a
saturation level. The result is a rising level of ‘excess plant’. Stated another way the
capacity credit for WPG rises more slowly with increasing amounts of WPG and tends to saturate.

There are significant costs associated with having ‘excess’ capacity on the system. Therefore the capacity surplus that results from WPG adds to the total generation costs.

It is amazing to see that what ESB predicted over ten years ago, when there was no wind in the system, come to fruition. In fact, the purpose of much of the writing in this blog was to draw the reader's attention to the added costs that we are all paying from having excess capacity.


So the question is why is the Government pursuing this policy when engineers at both ESB and Eirgrid knew and still know about the saturation point of wind ?