With the UK Grid operators today resorting to emergency measures to keep the lights on, Ireland imported much less than usual from the UK during peak demand at 5.45pm. The interconnector has a capacity of 500MW which would normally be running at full load, or near full load, during periods of high demand.

But today, during the peak demand period, the interconnector ran at just 176MW or 35% of capacity.

This amounted to just 4% of our energy demand needs. 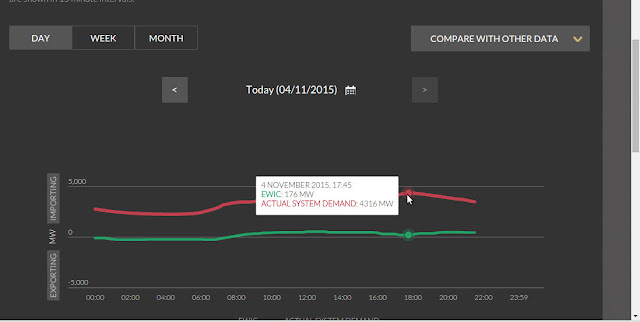 Last year, Irish Energy Blog warned this may become a problem if the existing capacity shortage in the UK remained :

But it is interesting that Eirgrid have taken no account of the situation in the UK where National Grid recently stated that Britain's spare capacity has fallen to a seven year low, prompting emergency contingency plans to be put in place such as shutting down large factories during peak periods.Surely in this climate, where the UK National Grid are considering restricting demand in their own country, they will also be reviewing exported power to Ireland via the two interconnectors ?

And it's not just the interconnector that is running at low output - our windmills were running at 1% for most of the day :

Same situation in UK and France:


So we are back to the "Do Nothing" Scenario - relying on our old power plants like we used to before the Green Blob raised its ugly head.

While we will have to pay a bit more for electricity generated here than we would have to pay if we imported it from the UK, it will still be cheaper than if it was generated by wind power.

But still our leaders insist that wind power and interconnectors are "the future".