THE Irish Wind Energy Association (IWEA) has described as “bizarre” a report from a leading group of engineers which called for Irish wind energy investment to be halted so Ireland could ensure its international competitiveness - Irish Examiner, March 4th, 2011.


So four years on, who won the argument - the Irish Wind Energy Association or the Irish Academy of Engineering ?

We were told that :

IWEA chairman Michael Walsh yesterday warned that there is no “solid reason why the high gas and electricity prices of 2008 will not return”.


We know now that in fact the price of gas has dropped significantly (about 40% from last year). Mr Walsh lost the bet. But he was right about the high electricity prices but not for the reasons he thought. We now have higher electricity prices than in 2008 but this is due to hikes in levies and network costs. If electricity prices were more reflective of fossil fuel prices, they would have gone down, not up.

“It also does not reflect the relationship between wholesale prices and wind generation. The study by Redpoint released this week demonstrates that this effect reduces the price of electricity by €256m per year by 2020 against a public service obligation cost of €52 million,” - Michael Walsh, IWEA, 2011.


There is no evidence that wind reduces wholesale prices or if there is, I have yet to see it.  Indeed, if the IWEA statement above was correct, then that would mean, given lower gas prices and lower wholesale prices, our electricity bills should have come down significantly. But instead they have risen and Ireland now has the third highest electricity prices in the EU :

Eurostat shows the Energy and Supply component of electricity bills for households which would include the wholesale price. As you can see, this component has risen 20% since 2011, at the time the Irish Examiner article was published : 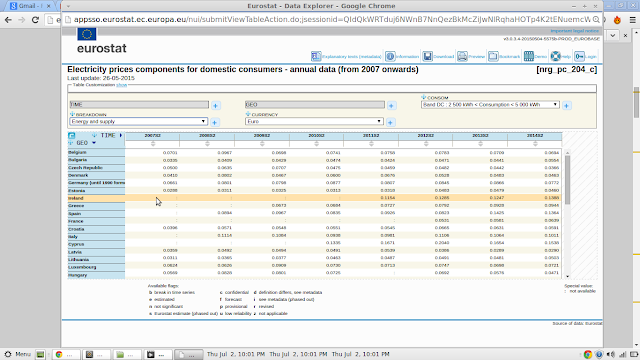 This tends to indicate that the wholesale price has only gone in one direction - and its not down. Remember, the above data does not include subsidies for wind farms or subsidies of any kind. So before you even add on the subsidy, the price of electricity has gone up, not down, which it should have done according to IWEA. Wrong once again. The report prepared by Redpoint should be consigned to the same bin that ESRI's "soft landing" report was eventually thrown in.

The addition of €30/Mwhr to the costs of wind generation is not supported by any quantitive evidence or indication how the estimate was reached,” - IWEA, 2011.

One can see from the diagrams here, that the wholesale price is normally around the € 50 MWh mark, outside peak times. Under REFIT, wind gets € 70 per MWh, plus another circa €9.95 MWh balancing payment.  So the additional € 30 MWh calculated by IAE back in 2011 was spot on and still applies in 2015. Wrong again, IWEA.

So why is our energy policy still been led by those who have been proven wrong ?